My television broke in 1990 and this event changed my life. I’d been listening to the usual bits of daytime Radio 4 before then (eating breakfast with the Today programme, having my tea with The Archers) but it wasn’t until the telly died that I really began exploring radio and seeking out new things to listen to.

BBC Radio 3 gave me Mixing It, an inspirational show that opened up entire new worlds of music to me - I was such a fan I even wrote to them and did voluntary work there. Then in 1997 I went along to Kersten Glandien’s acousmatic concert series RadioArt in Germany at London's Goethe-Institut. The same year London Musicians’ Collective (LMC) published a magazine called Resonance Radio Issue. The attached CD (compiled by Phil England) contained 75 minutes of radio art works. I’ve listened to this so many times over the years that I could probably recite you the entire text of Lotta Erickson’s Please Mr Coldstream with every pause and breath in place, and if I listen to this piece again right now I know it will move me as much as the first time I heard it.
The following year LMC founded Resonance 104.4fm (the world’s first radio art station) and it is still the most diverse, interesting broadcaster around, and one that consistently provides a really radical and joyous listening experience. The station now has thousands of fans worldwide (even L’Uomo Vogue wants a piece of the action).
I never did get a replacement television set.
Ivy Arch radio lavender bags (the perfect gift for the radio enthusiast) are on sale in my Etsy shop. 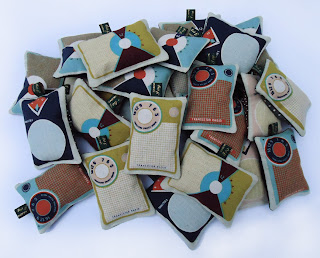