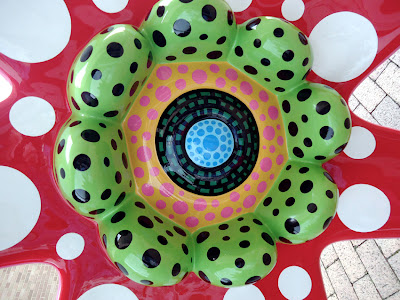 Yayoi Kusama's Tate Modern show is my worst nightmare. The most disturbing childhood dream I remember is one where I had to count hundreds of red dots burning on a black background. The background changed to red and the dots became black and I still could not count them. They moved and multiplied and as soon as I started counting more would appear until I knew there were too many to count. Terrified at the impossible ordeal and the spotty vision I screamed myself awake. I've never forgotten the terror of those dots and was confronted with them again looking at Kusama's 1952 painting Parting. It is a visual record of my vivid dream.
Kusama's art touches me. It's familiar, funny and terrifying. Her work famously depicts her history of psychosis, her crazed visions and oppressive hallucinations, but I found it also described my own neuroses. I wonder how many other people in the gallery that day also had a fear of numerous spots? Perhaps it's common.

She is a prolific artist, an original whose work has influenced many others. It's well documented that Andy Warhol, Claes Oldenburg, Lucas Samaras and Yoko Ono were inspired by her and I can see her ideas in a wide range of contemporary art (Michael Brennand-Wood's lace constructions, Tony Cragg's sculptures, Leigh Bowery's performance art, Anthony Gormley's Asian Field, Damien Hirst's spot paintings).
I loved the exuberance of her Happenings and her zany fashion range. I was stunned by the complexity and detail in her many paintings, then found myself wanting to lie down on the sofa and fall asleep in the oddly relaxing fluorescent stickered I'm Here But Nothing room.
I'm already planning my next trip to London to see the show again.