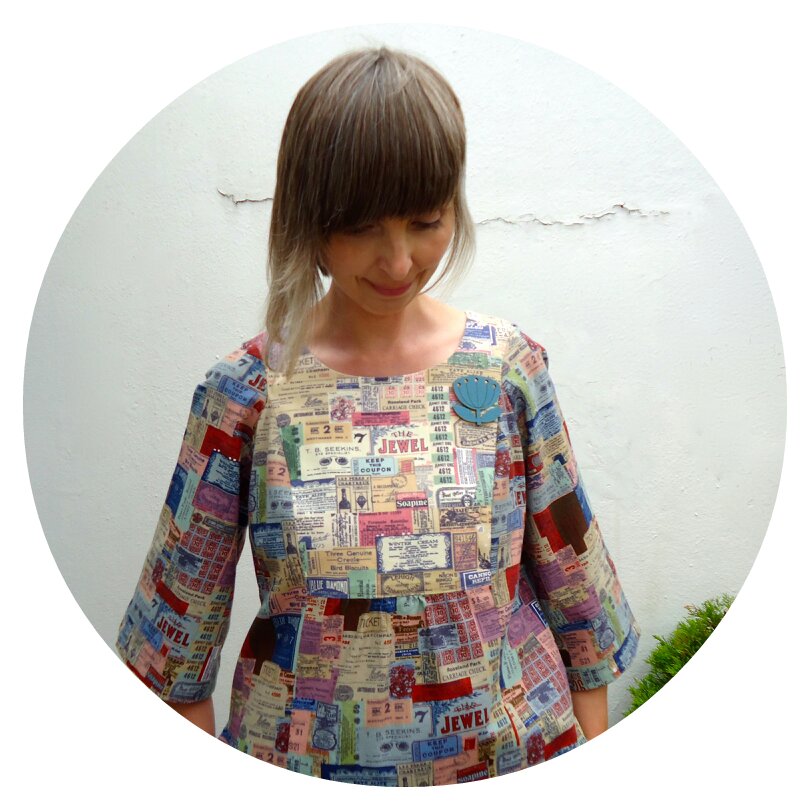 Brighton's budget fabric emporium Fabric Land has come up trumps again with Ticket to Ride another great in-house print design. I recommend a visit to one of their shops (they have several branches across the UK) as their astonishingly bad website doesn't do justice to their own brand fabrics. Ticket to Ride is a printed collage of vintage tickets, labels and coupons. It's a sturdy cotton with a linen-like feel and is available in 3 colourways. At just £3.99 a metre I thought it prudent to get 2.5 metres in Royal and the same amount in Yellow. 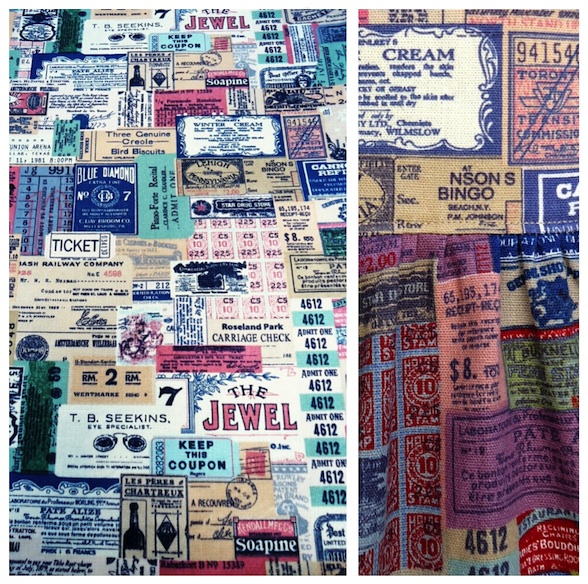 It's the same type of cotton I used for the Berlin Macaroon Dress - a garment that is greeted with gasps of delight every time I wear it out and about. I decided to make the Simplicity 2363 pattern again as it works so well in this material but this time drafted a new closed-front yoke for a change. For the first version I used the darker (Royal) fabric for the body and sleeves with the paler (Yellow) fabric for the yoke. 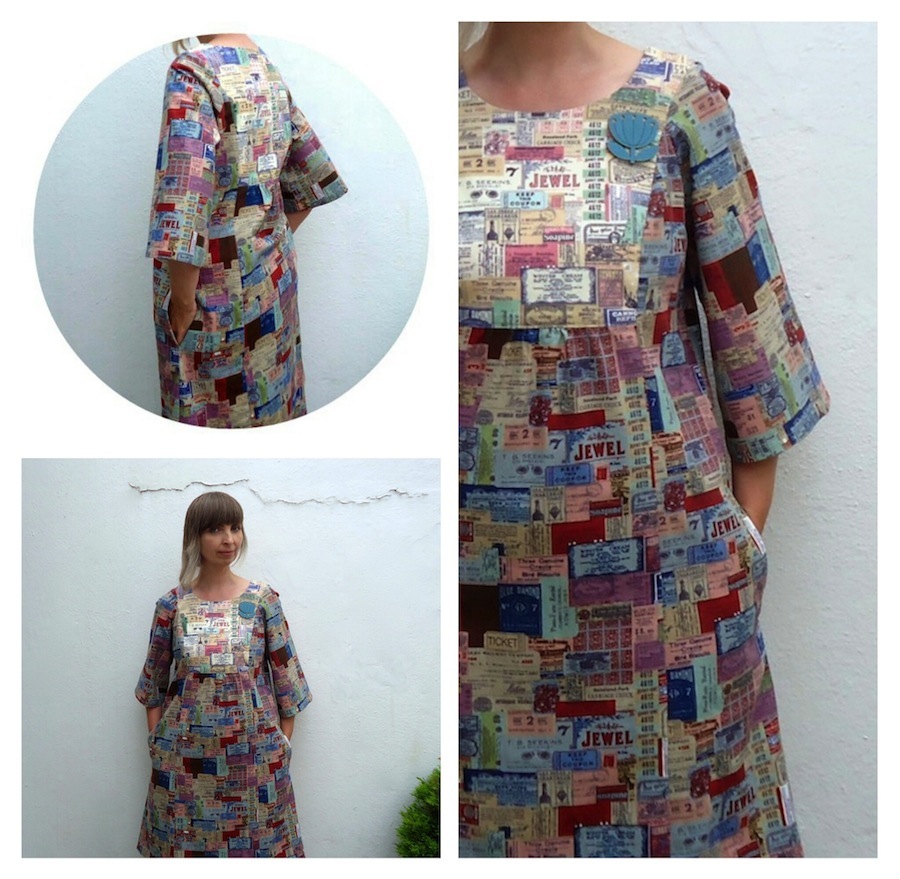 I was so taken with it that I immediately made another with the fabric combination in reverse. 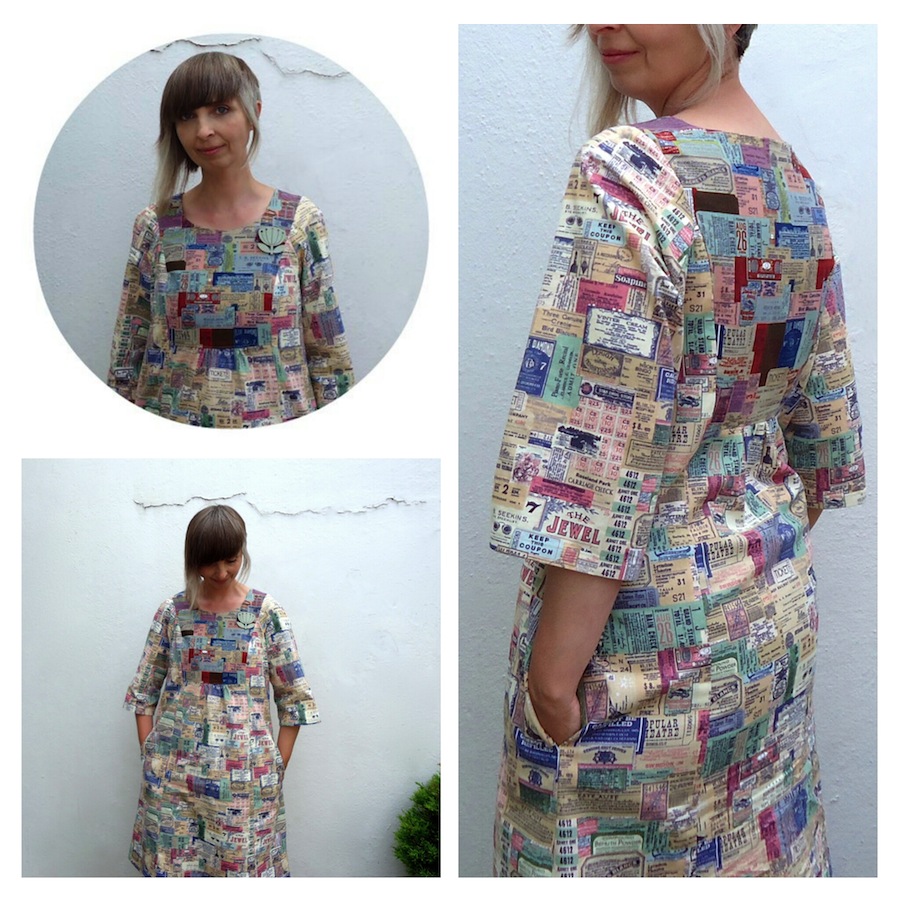 Each dress cost £9.98 to make. Good enough for everyday Worthing wear but also fabulous enough to wear to the Grand Futurist Concert of Noises and just the thing to wear when trying out Peter McKerrow's hand built intonarumori. 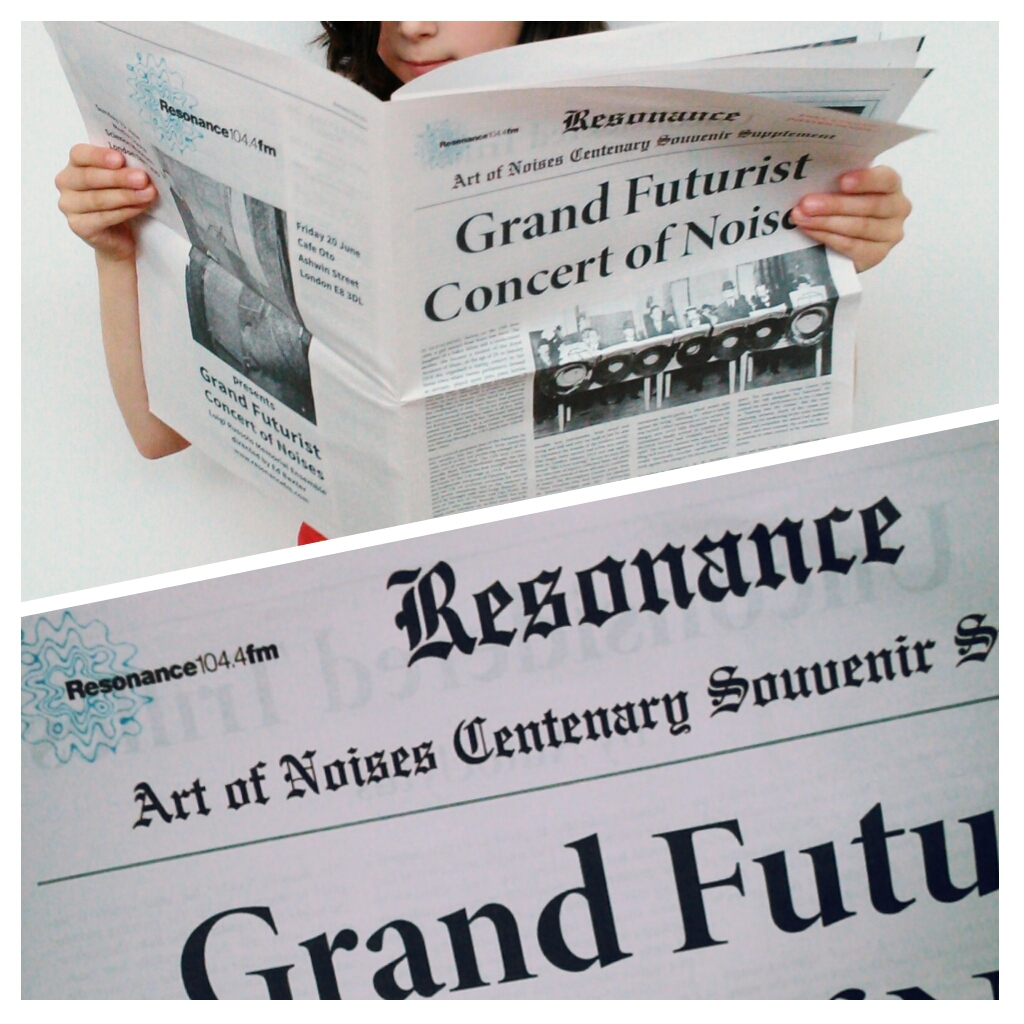 On Sunday I went to the Grand Futurist Concert of Noises at London's Science Museum, an event held by Resonance FM to mark the centenary of the first Futurist Concert staged in Britain on 15th June 1914 in accordance with Luigi Russolo's groundbreaking manifesto The Art of Noises (L'arte dei Rumori). 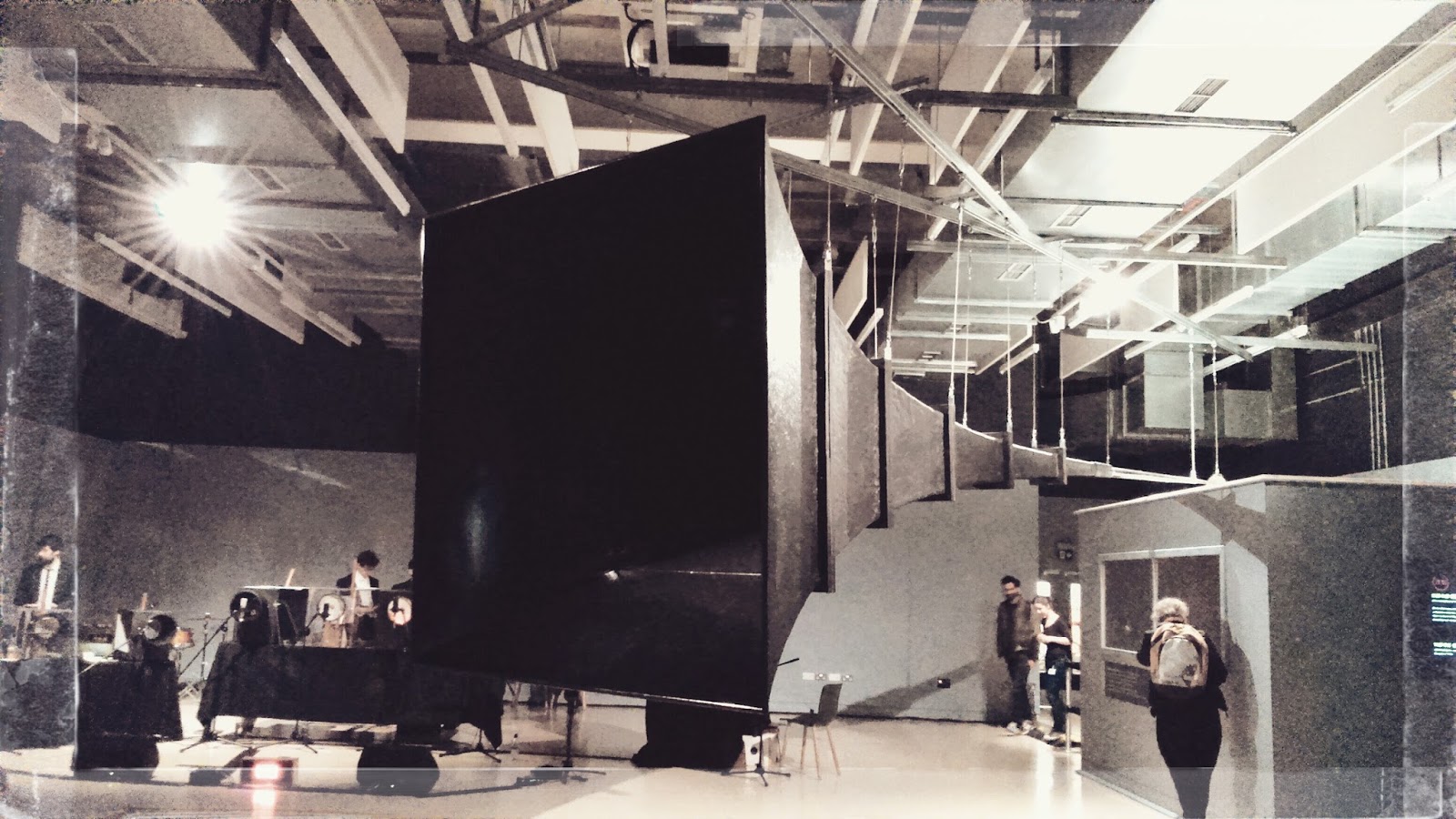 I wore a dress made of fabric with a print of vintage bus, tram and train tickets (a new creation to be blogged soon) reckoning this would be in concord with Futurist ideas of speed and progress, but later reading Dan Wilson's Art of Noises Centenary Souvenir Supplement in which Marinetti's ideals for futurist clothing are set out I regretted not wearing this dress instead.

Never mind, the concert was brilliant! On hand-built instruments (large scale noise making machines called intonarumori built to Russolo's original designs by Peter McKerrow with modifications by sound artist Daniel Wilson), vintage horns, theremin and playback devices broadcast through Aleksander Kolkowski's immense Exponential Horn, The Luigi Russolo Memorial Ensemble caused a tremendous commotion! It was exhilarating to hear and the audience roared in approval. Afterwards we were invited to try out the instruments and joined the long queue to have a go on Sarah Angliss's theremin.

The Grand Futurist Concert of Noises is directed by BASCA Sonic Arts Composer of the Year, Ed Baxter and performed by Marcos Gomez, Peter Lanceley, Peter McKerrow, Michael Umney, Dan Wilson plus Aleks Kolkowski (vintage sound effects), Adam Bushell (percussion) and Sarah Angliss (theremin). The ensemble will perform for a final time on Friday 20th June at Cafe Oto, Ashwin Street, London. If you're at all able to travel to London you'd be mad to miss the sonic event of the century!

The Exponential Horn is the UK's largest audio loudspeaker and will be installed at Science Museum until 27th July 2014.
Posted by Ivy Arch at June 17, 2014
Email ThisBlogThis!Share to TwitterShare to FacebookShare to Pinterest
Labels: Art, London, music, Science Museum, sound art, weekend

The Just Cause: taking part in Worthing Community Play

On Saturday I'll be donning my homemade Victorian outfit, tying a bonnet tightly under my chin and fixing my face with a stern glare to join a cast of some 200 fishwives, seafarers, schoolchildren, choirs, temperance campaigners, down and outs, church folk and gentry as we re-enact scenes from 1880s Worthing. 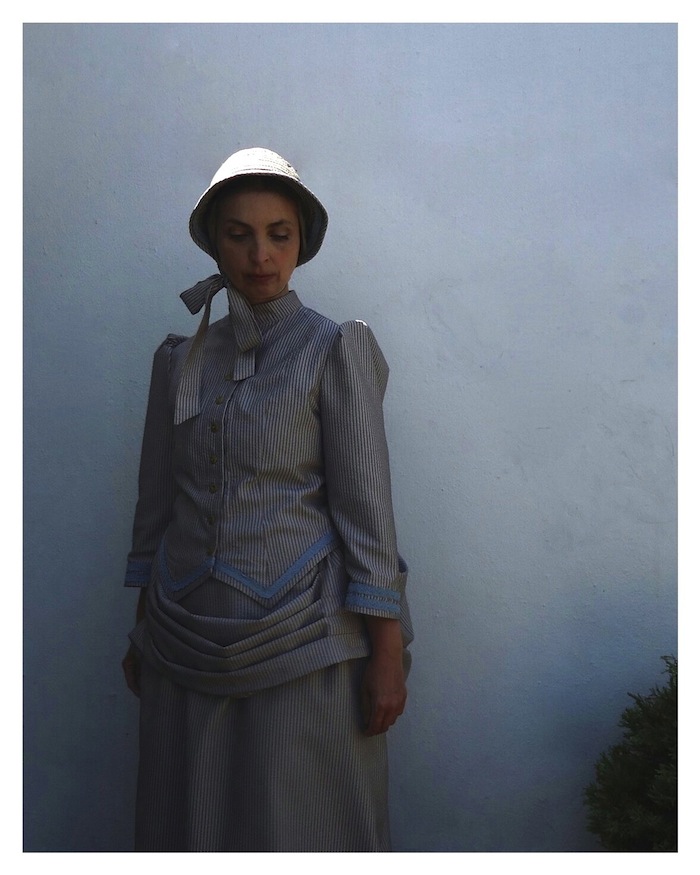 It's been a long journey to reach this point, two years in the making for the creative team behind Worthing's Community Play The Just Cause and a good eight months of workshops and rehearsing for the cast. I'm a relative newcomer to the production having just joined in February – actually I had only intended to watch my child's rehearsals but soon found myself one of Worthing Working Women's Temperance League... 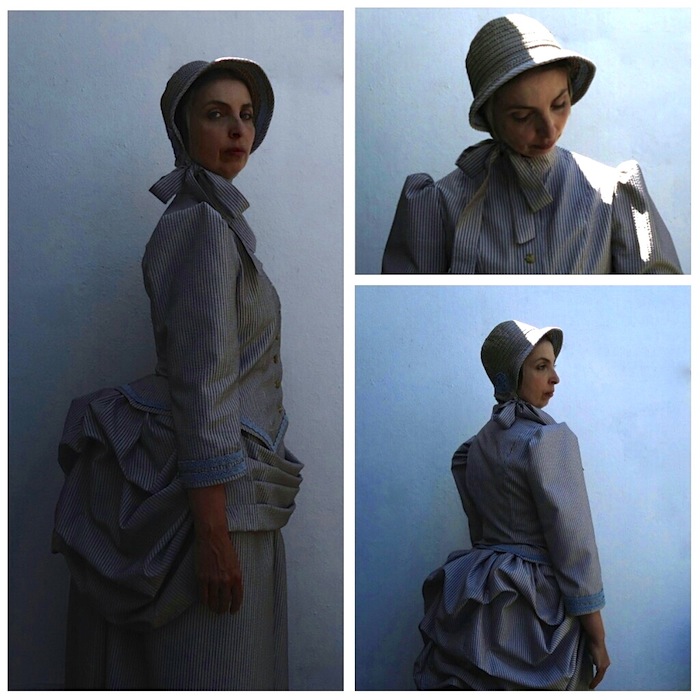 A highlight of taking part in the play has been singing Sussex folk songs every week at rehearsal and around the house at home with my daughter in our best Sussex accents surelye, our favourite tunes being Fathom The Bowl and The Sussex Wedding Song. It's also been fascinating finding out about the lives of ordinary people in Victorian Worthing and illuminating learning about the hardship and struggles faced by the working class women who were moved to campaign for temperance with hope of improving lives plagued by poverty and domestic abuse from alcoholic husbands. The Temperance League was especially popular amongst the female brick layers in Worthing. I hope we do them justice with our performance. 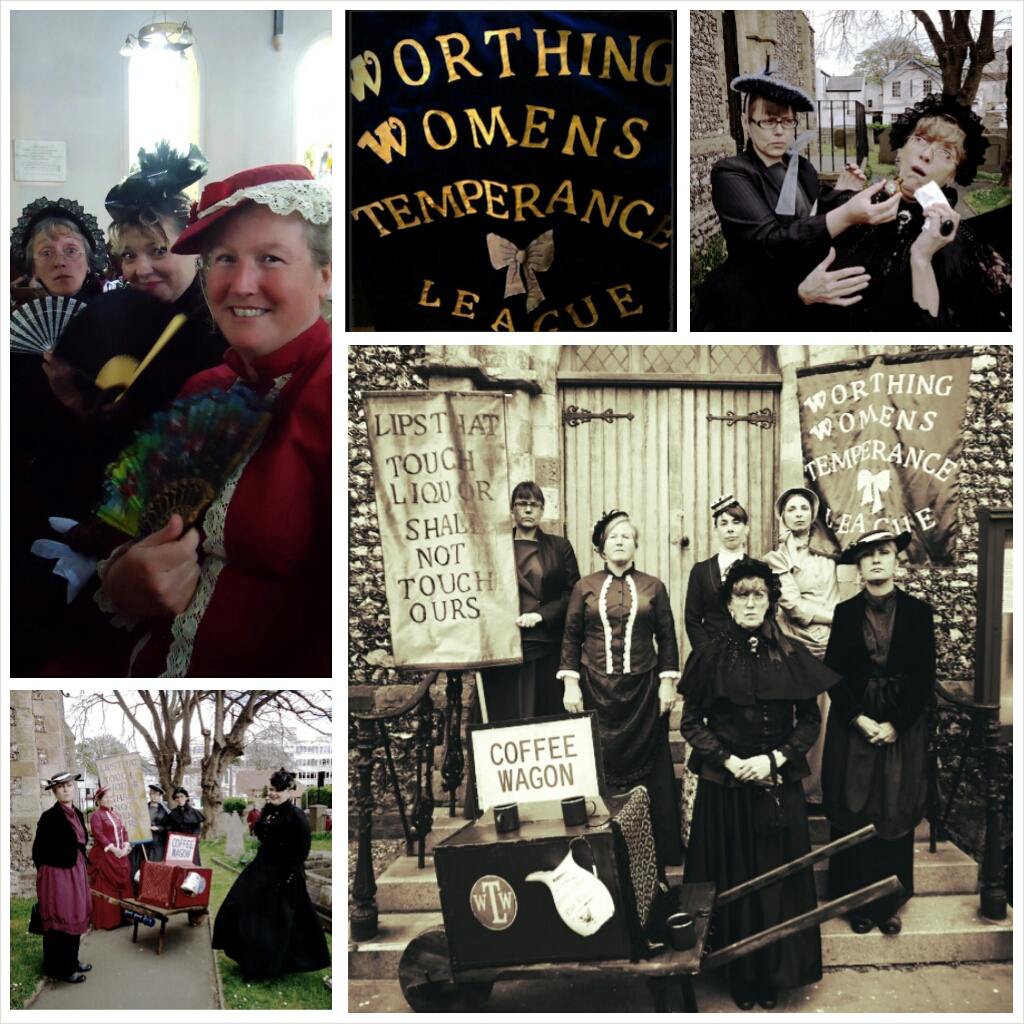 Most of all I've enjoyed the experience of feeling a part of the community of Worthing and getting to work with such a splendid motley crew of townsfolk - we've had many laughs and much fun along the way. We wunt be druv! 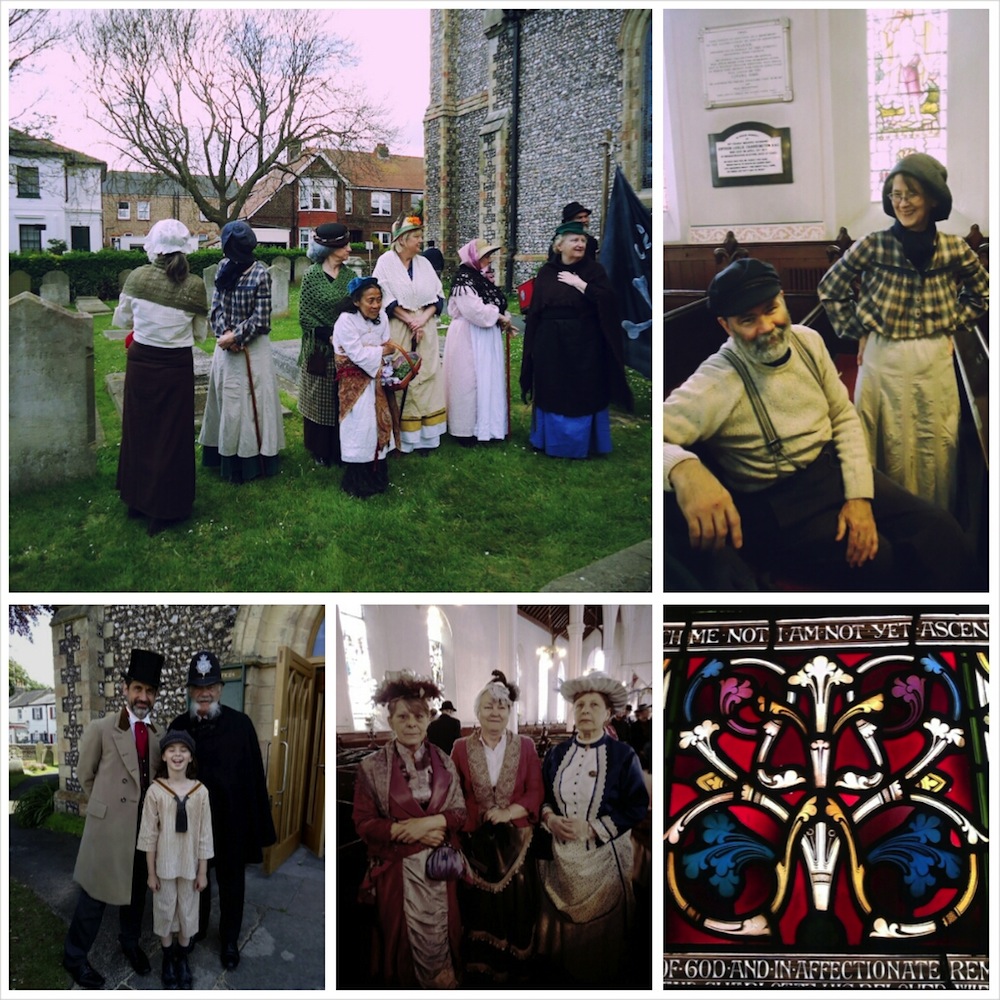 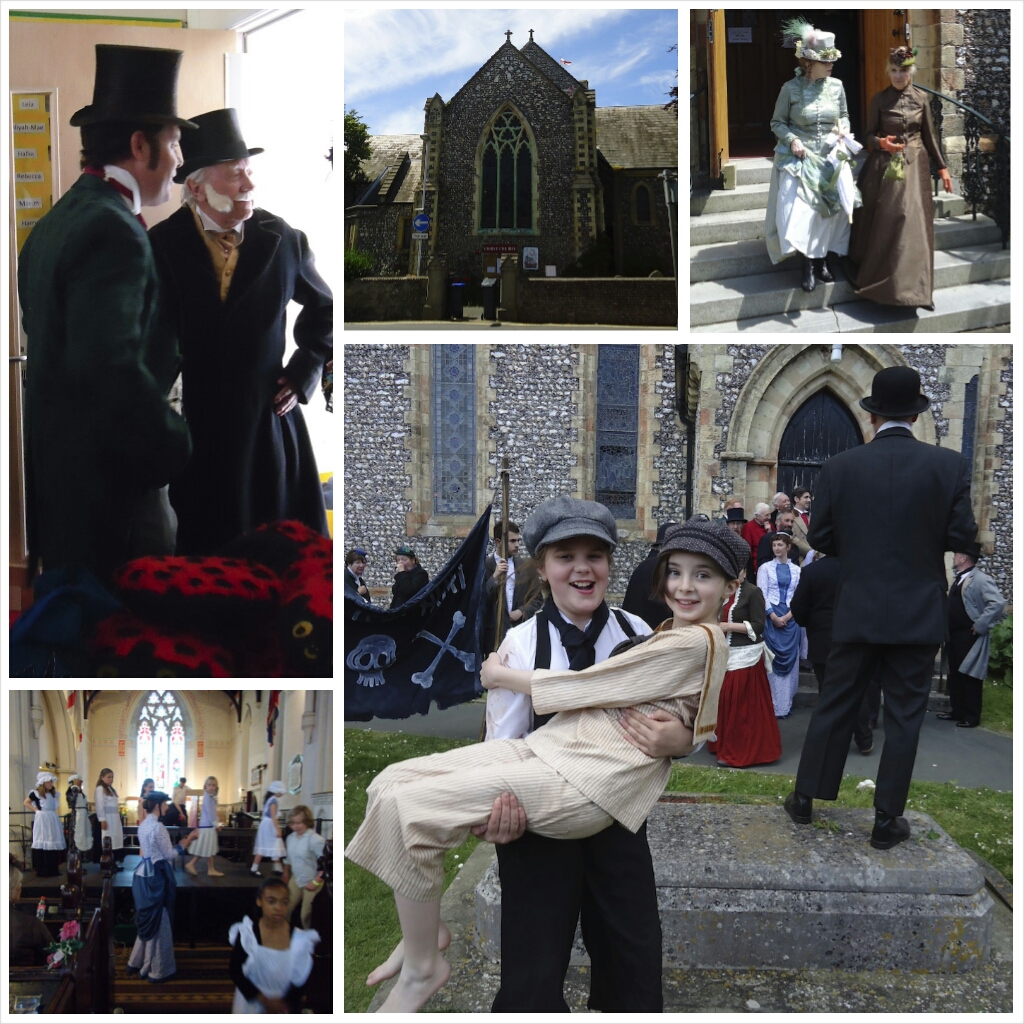 The Just Cause takes place at Christ Church, Worthing on 14th, 21st and 28th June 2014. All tickets have now been snapped up for all three performances. However, there will be a queue for non-ticket holders at each show with priority entry given to people dressed in Victorian costume. Visit Worthing Community Play or follow us on twitter. 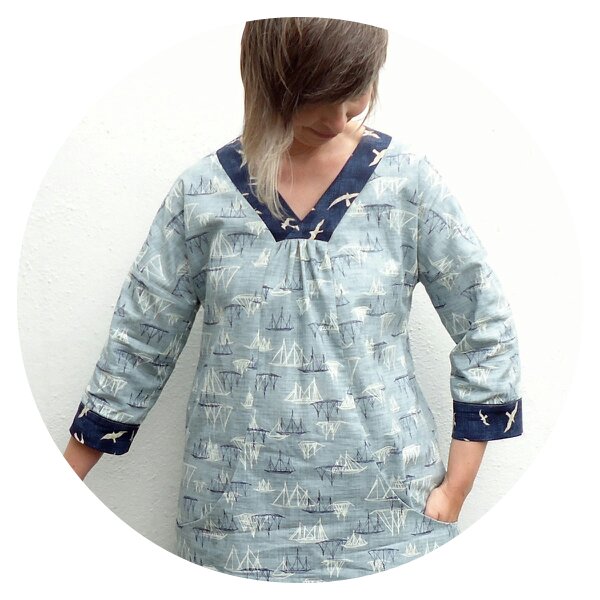 The red Cappuccino dress I made in April has really come into its own as a garment I love to wear every day. It's so comfortable, the deep pockets practical and the sleeves are narrow enough to fit easily under spring coats and jackets. The V-neck collar reminds me of the simple elegant neckline of Sou Sou's kimono blouse, it's very Japanese. I had to make a second! 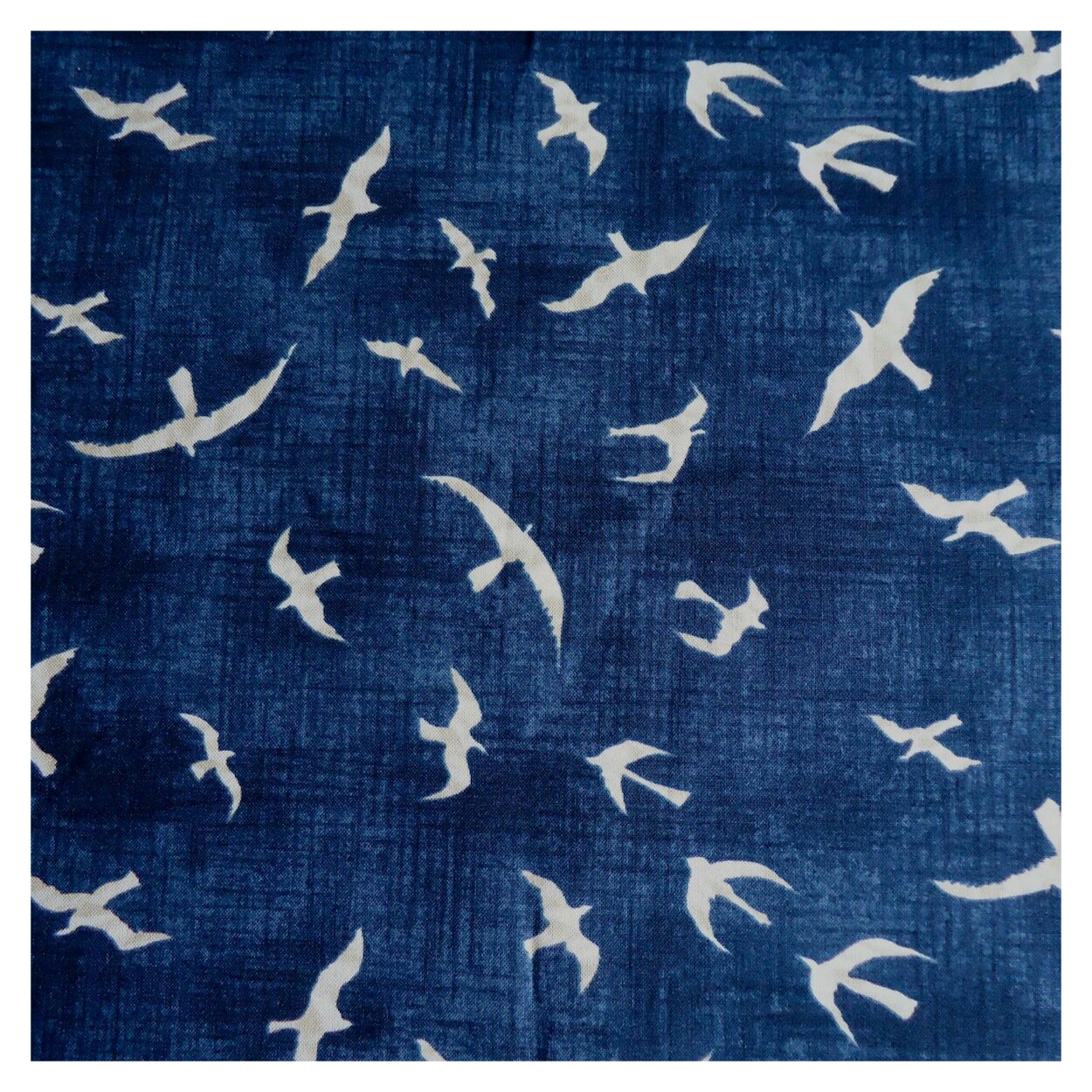 My fabric choice was a birthday-money purchase from C&H Fabrics. Each time I visit the dressmaking fabric department of their Brighton branch it alarmingly seems to have shrunk. I found these wonderful prints tucked away in their quilting section. I didn't study the selvage when I bought them, just loved the print designs and feel of the fabric – smooth soft cotton. On closer inspection at home I saw that they're designed by British textile designer Janet Clare from her Hearty Good Wishes collection produced by Moda Japan. Janet Clare's website biography is charming – she's a quilter and stitcher as well as a designer and author. Making up a second Cappuccino was plain sailing and I only had to glance at the instructions this time. The fabric behaved beautifully and is wonderfully soft and light to wear. It's a more sophisticated colour palette than I usually go for but I feel properly elegant and grown up in this dress! 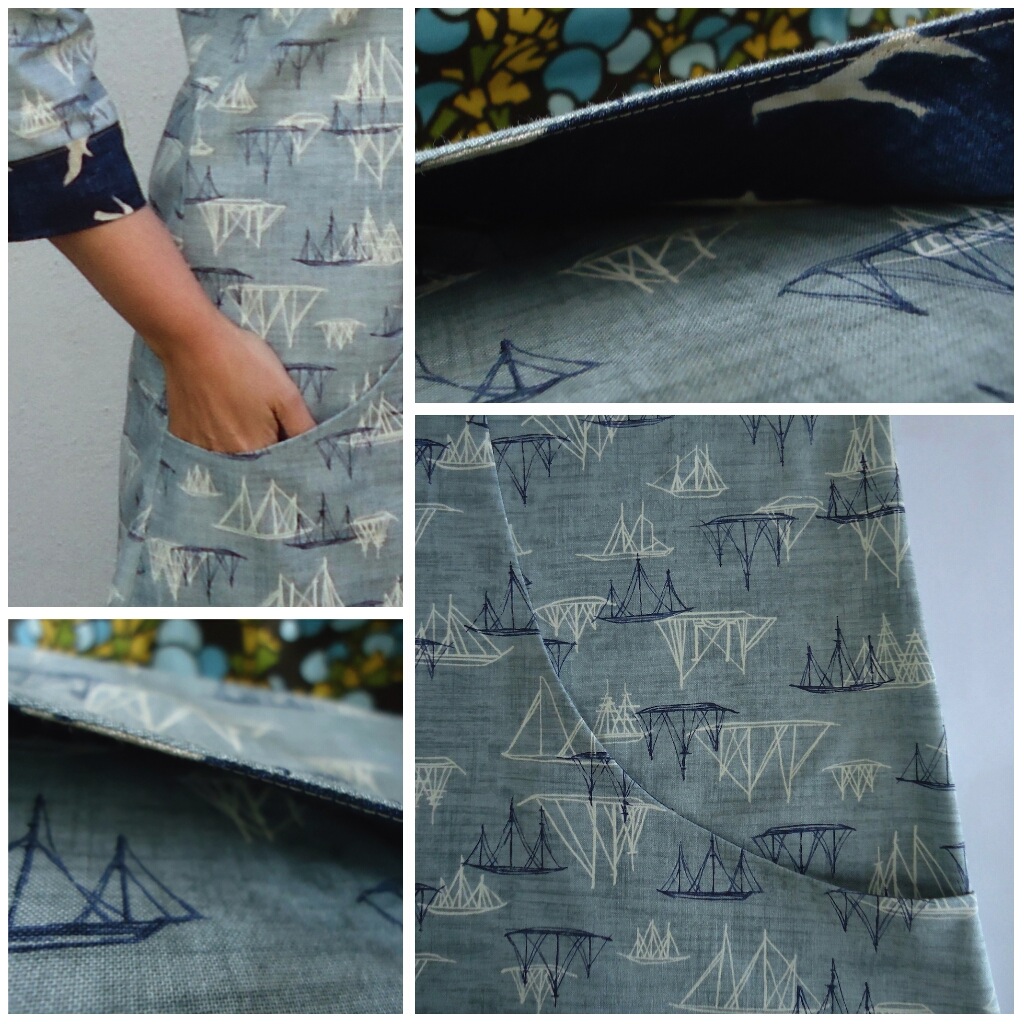 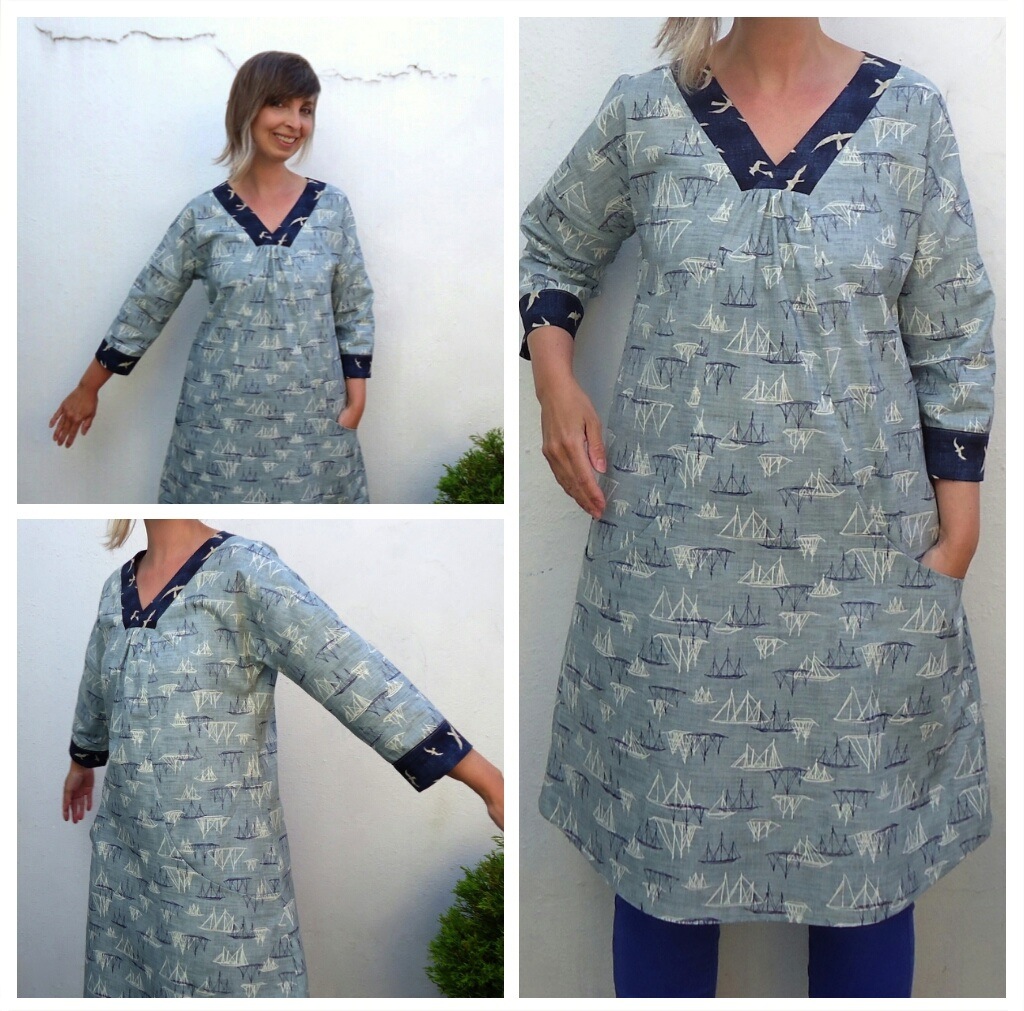 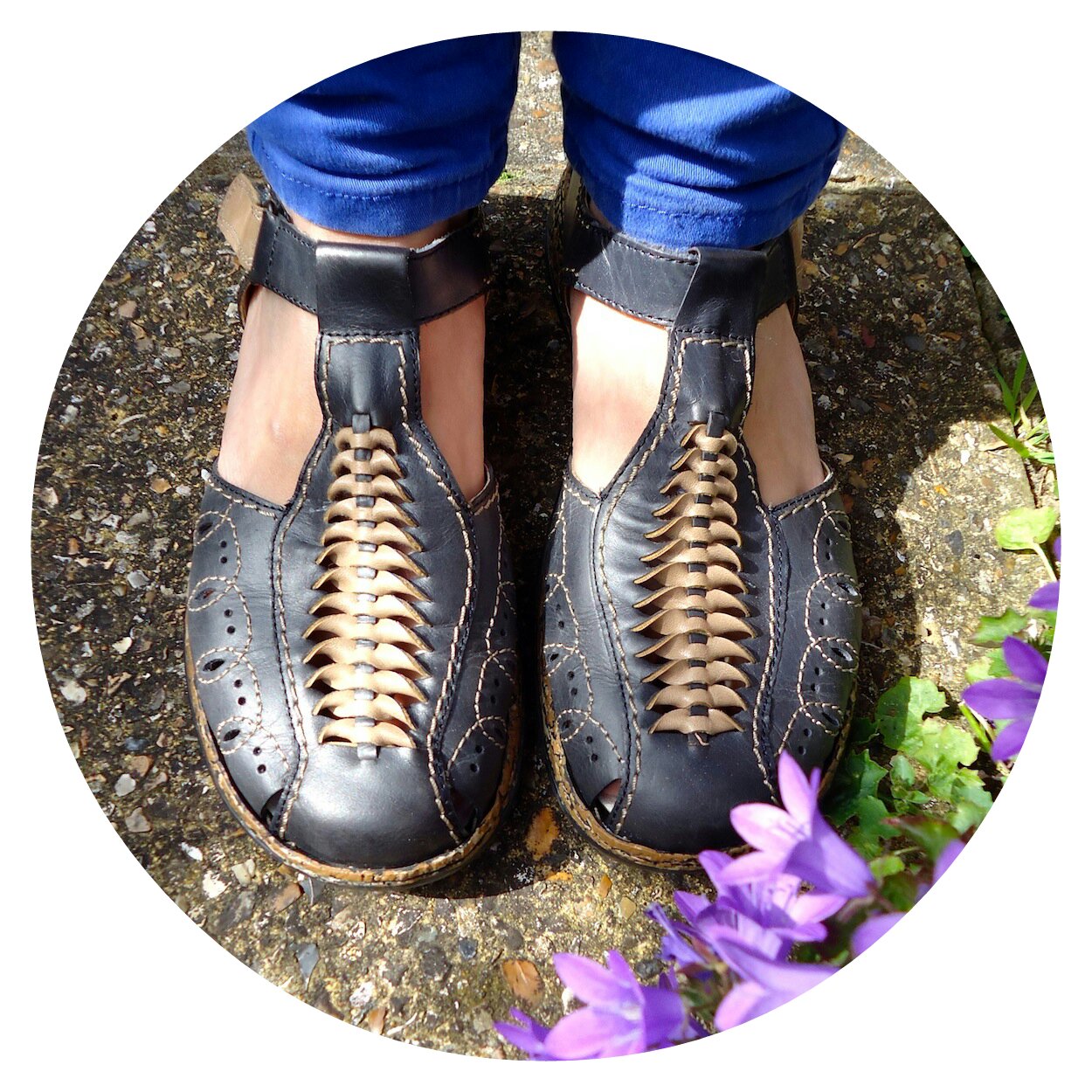 Along the banks of the River Adur 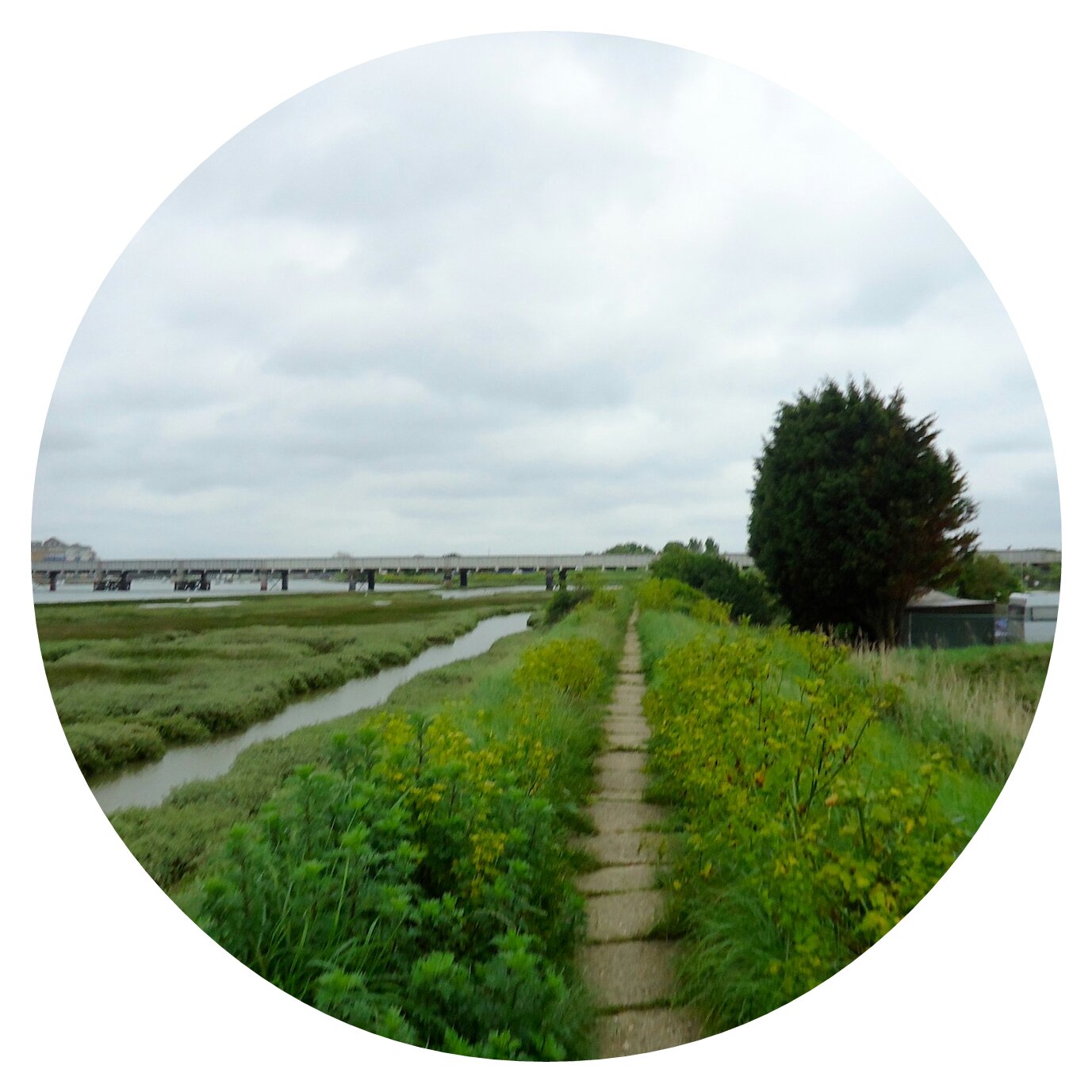 Last Wednesday was the gloomiest, chilliest day of May's half-term holiday but that didn't stop us wrapping up warm and going for a walk along the banks of River Adur with good friends and their adorable schnauzer puppy. 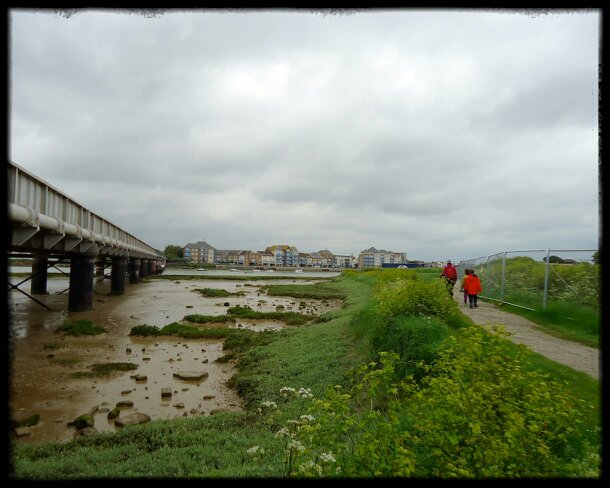 We sipped take-away coffee and ate pastries bought at Shoreham's Real Patisserie while our children romped, climbed and swung in a windswept playground overlooking the river. 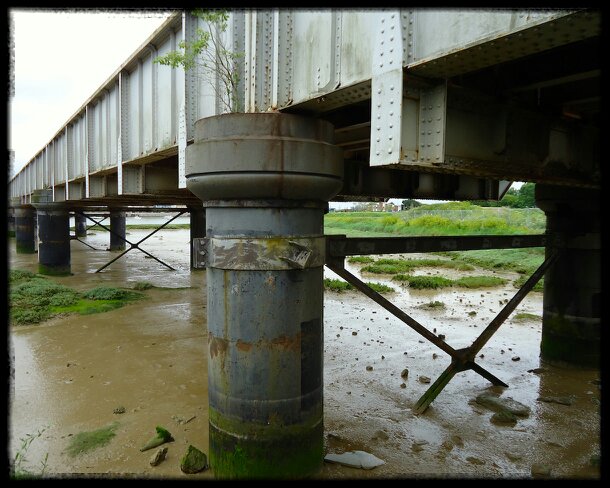 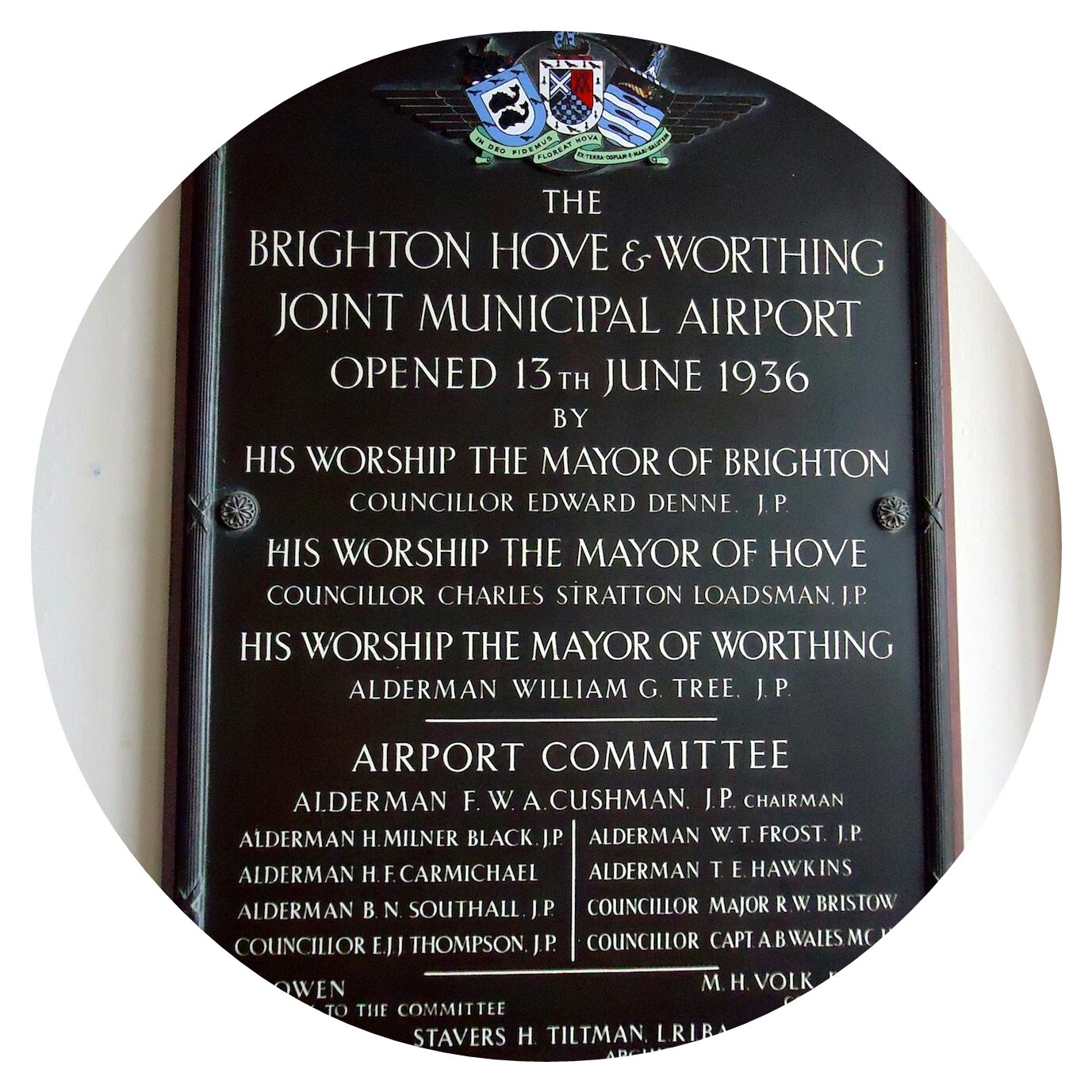 The Grade II listed terminal building has expanded into a huge (dog friendly) restaurant inside while the outside is held up by scaffolding with rusting walls of peeling paint. It has noticeably deteriorated since I last visited a few years ago and this splendid building is crying out for some love and care. 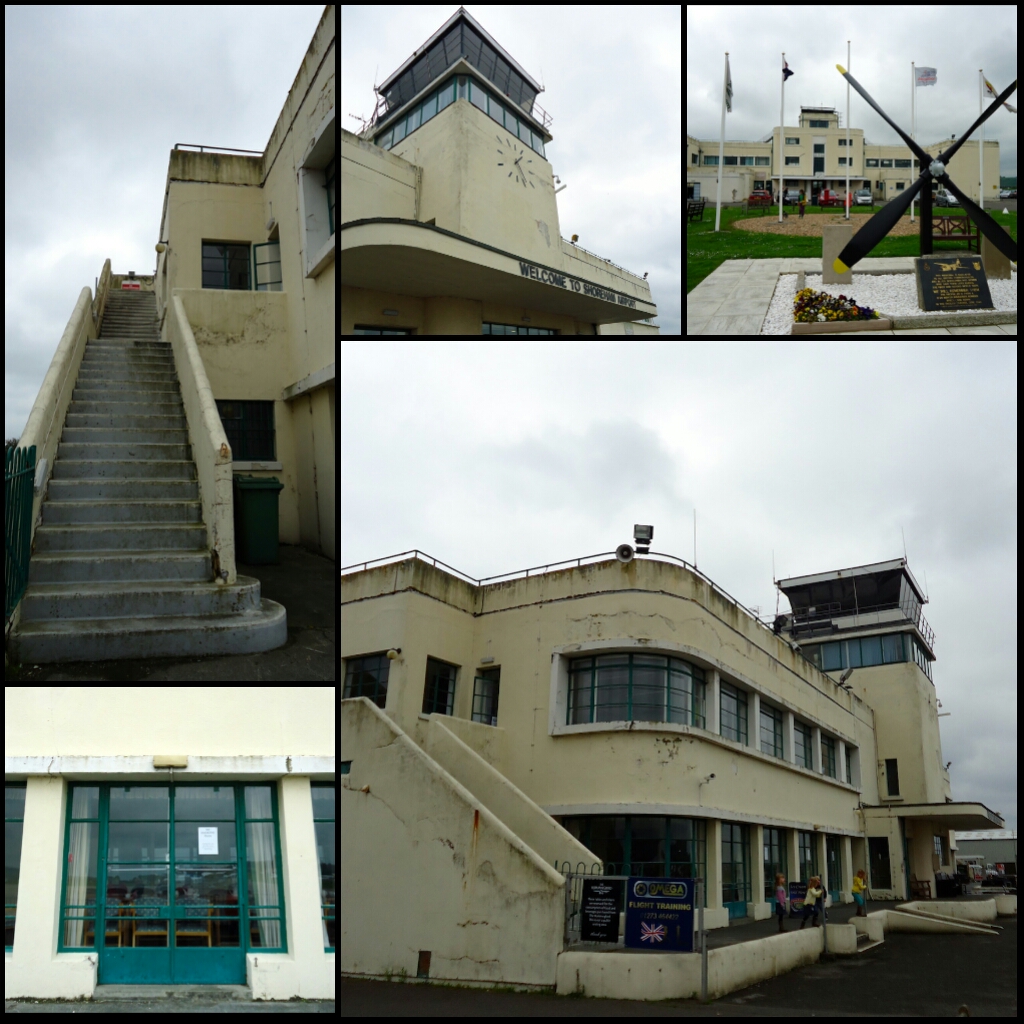 It seemed too windy for any planes to take off so we continued our walk through a boggy field and alongside the colourful houseboats on Shoreham Beach, taking in another playground before walking back across Adur Ferry Bridge. 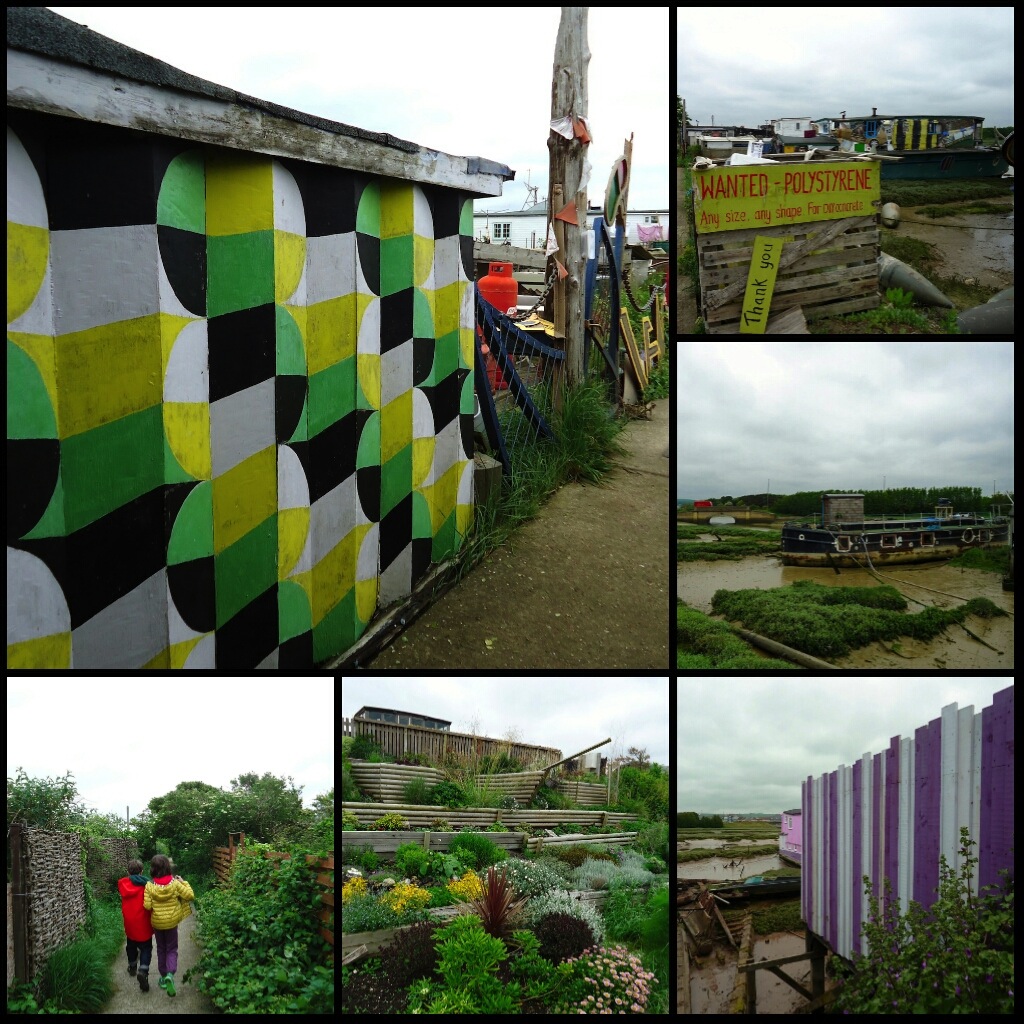