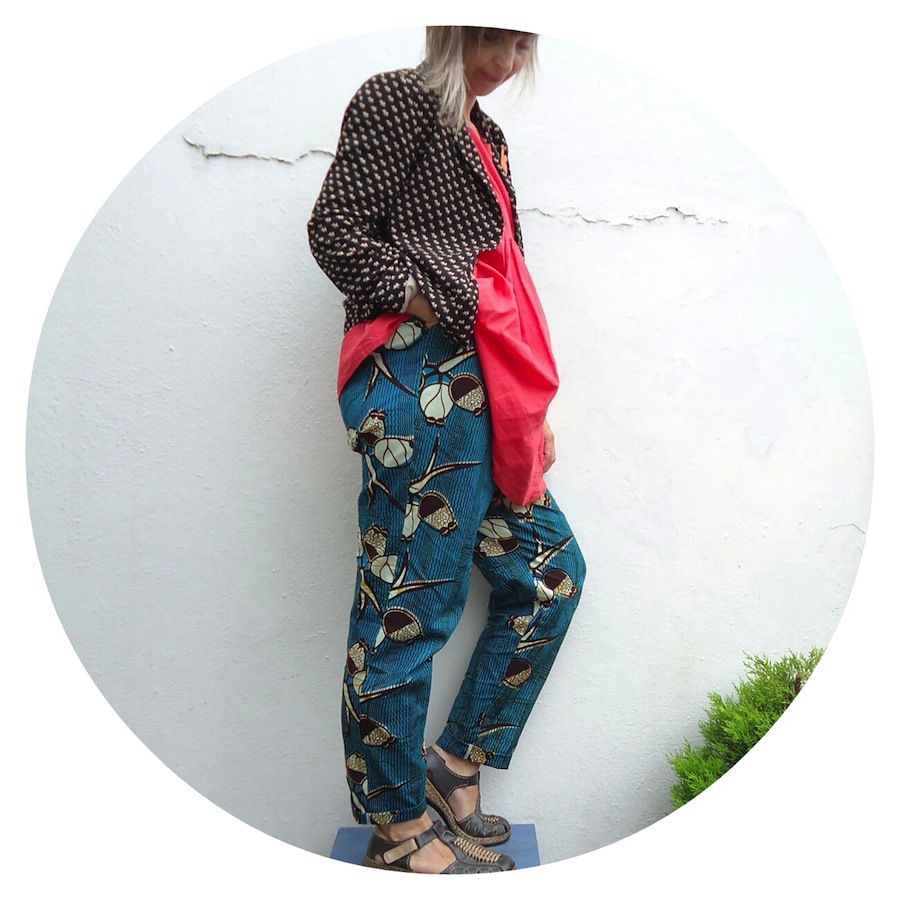 Slouchy, loose-fit harem style pants are everywhere right now and they got me thinking of a beloved pair of peg-leg paisley cotton trousers I wore in the 1980s. They were homemade from fabric bought at Stourbridge market and I wore them with an oversized bobbly brown jumble sale jumper with socks and sandals. Perhaps it's the flush of perimenopause that makes me want to recapture my awkward youthful essence, or maybe my style hasn't really changed much since then, but it's an outfit I want to wear all over again. 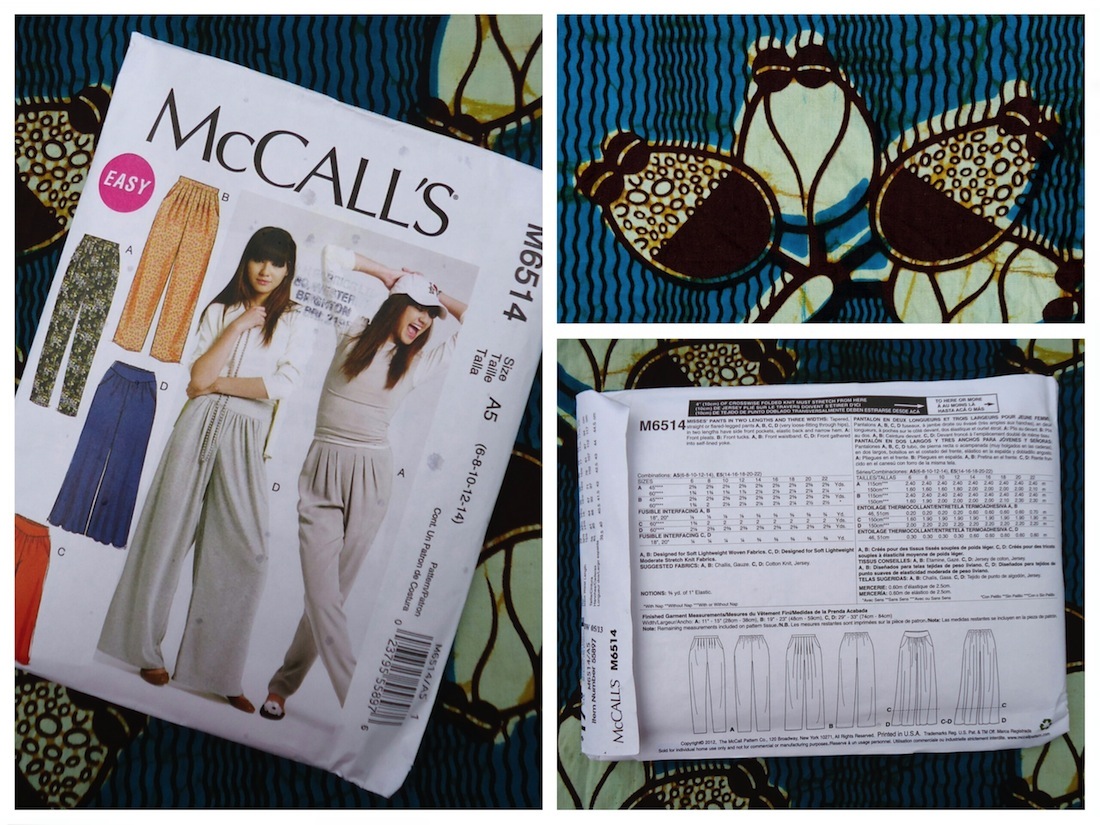 McCall's M6514 was the only pattern in stock at C&H Fabrics that looked approximately like it could satisfy this urge to run up a pair of baggy trews. I cut out a size 14, mindful that a smaller size wouldn't fit comfortably over my girth and rear, but needn't have worried. The design and sizing turned out to be über generous and I had to reduce them by 4cms width from hip to calf to stop myself looking like a one-woman MC Hammer revival. 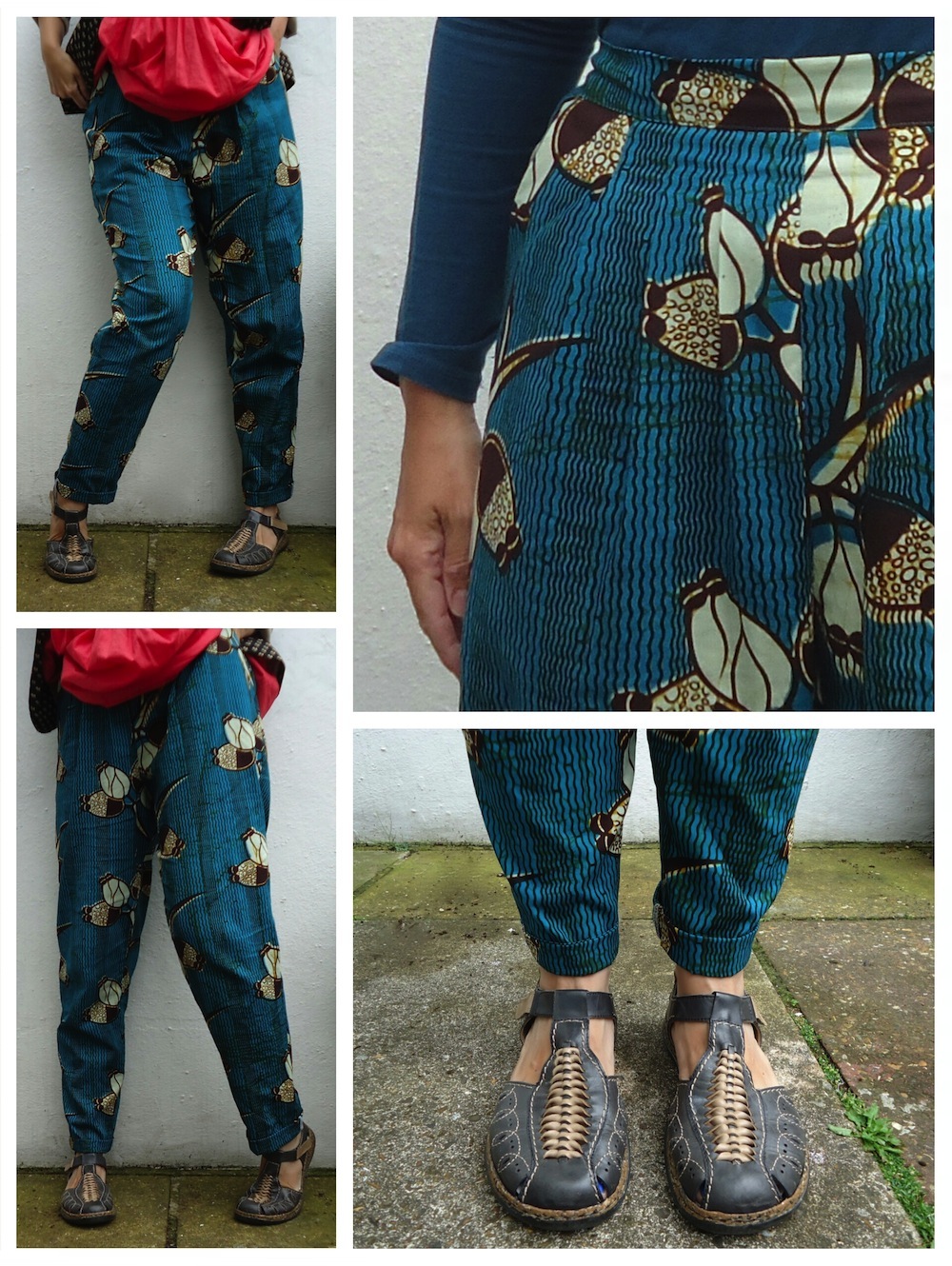 The McCall's pattern suggests stretch knit fabrics but instead I used an African wax print cotton which is closer to the look and feel of my original 1980s baggy trousers. Once I'd cut out the pattern they were a very quick and easy sew (just like it says on the packet) even taking into account necessary alterations. 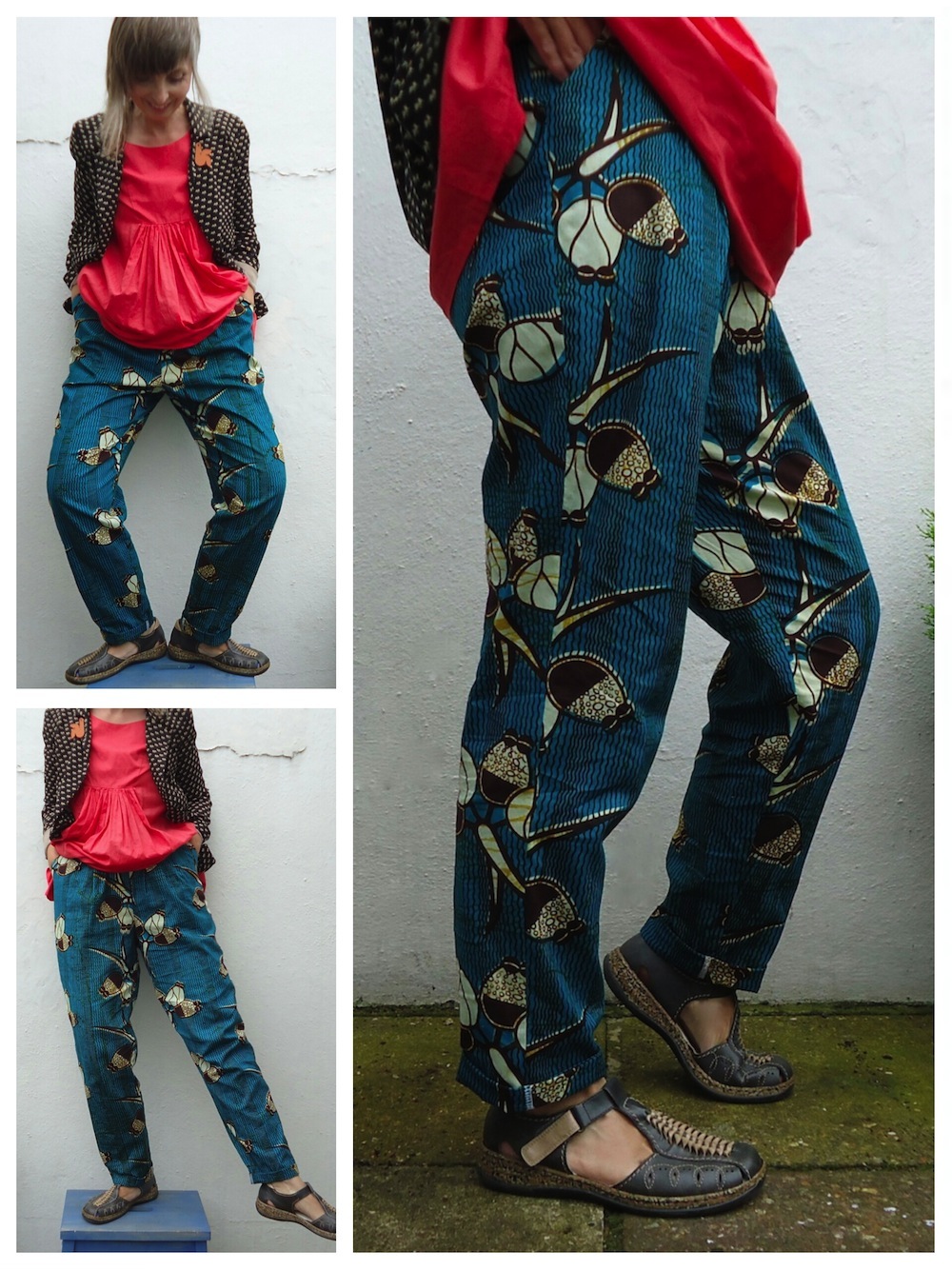 They have a flat waistband at the front, are elasticated at the back and have deep curved pockets - so comfortable to wear. They came up very long in the size 14 so I've given them a permanent turn-up hem (stitched down at the side seam) which also smartens them off nicely. I love them! 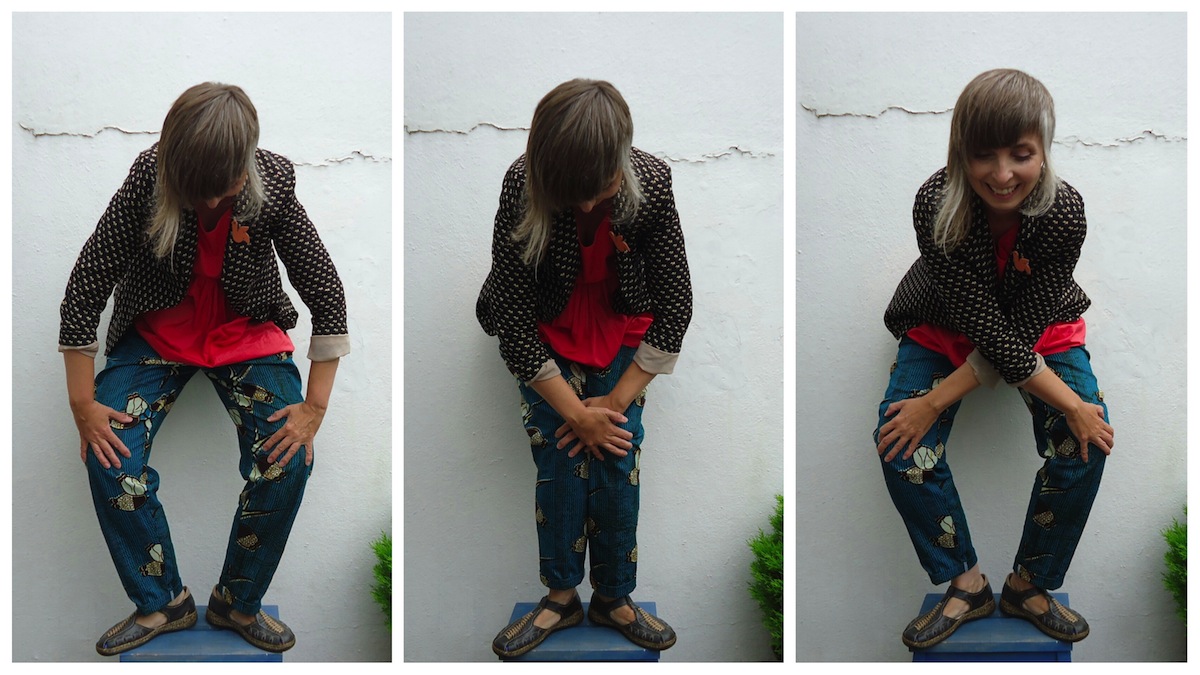 Teville Gate in the Summertime 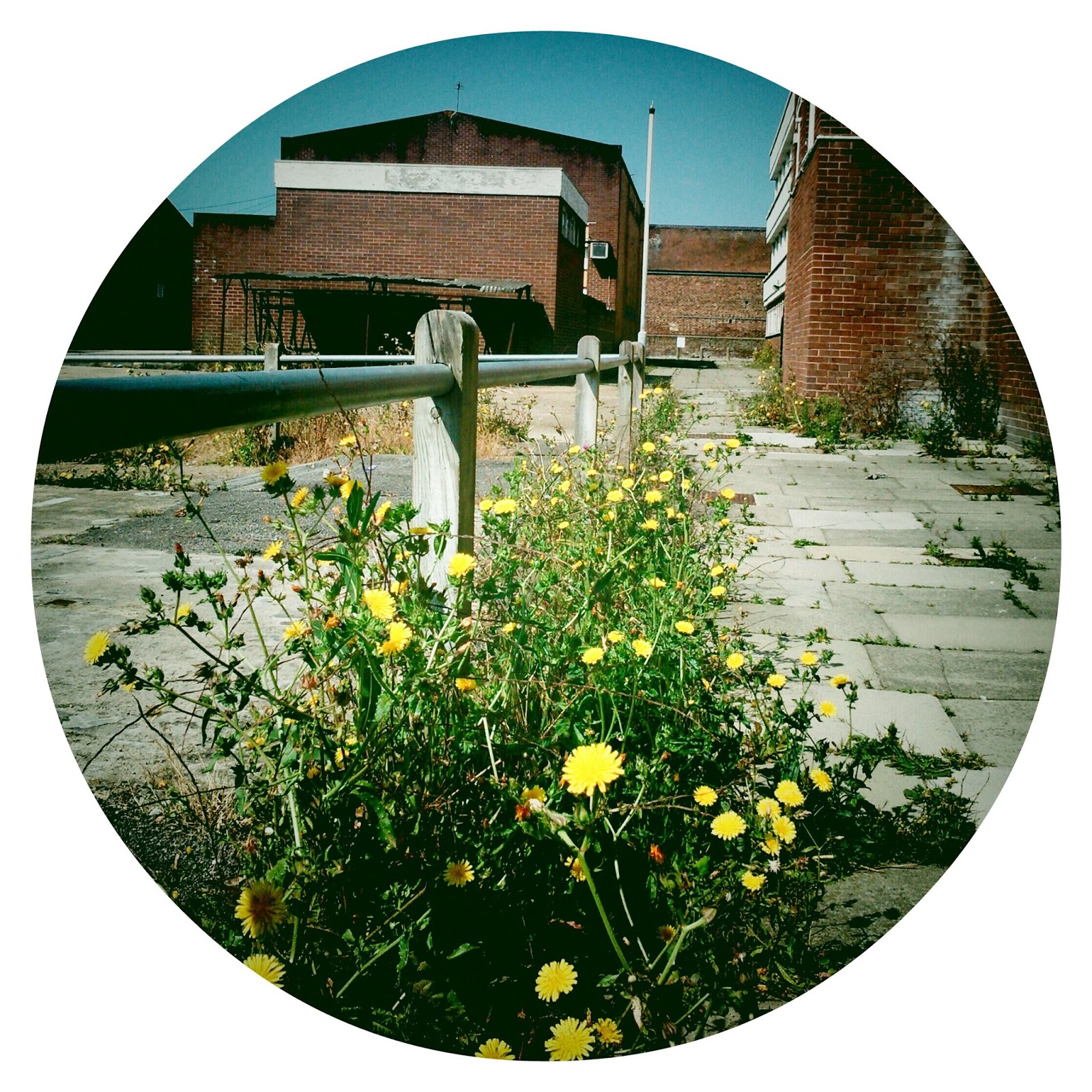 Teville Gate is one of the great mysteries of Worthing. A vast derelict space right in the centre of town, it's the first sight you see when arriving from Worthing's central train station. No one can fathom why this huge prime piece of real estate full of potential has remained empty for so long. Our Conservative council still seem to favour it being turned into some sort of money-spinning entertainment multiplex experience, though one of these proposed schemes fell through and the current firm appointed by them have failed to raise the £150 million capital needed to fund the colossal twin-tower design hotel, conference centre, 9 screen multiplex cinema, 86,000 square foot supermarket and parking space for 967 cars that the council would dearly love to see. Perhaps just as well, it sounds ghastly! 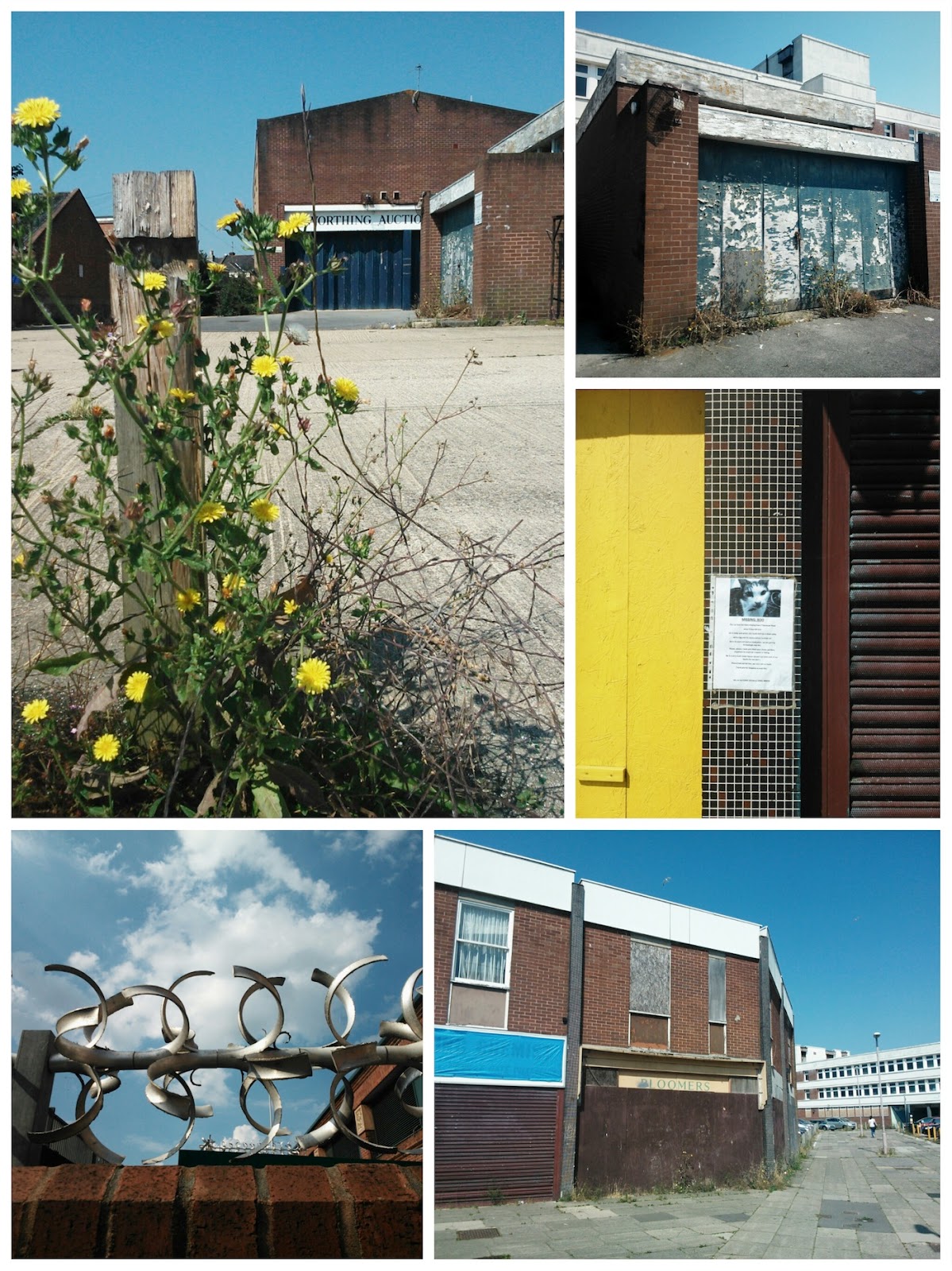 I think it's a shame this site wasn't considered for the new secondary school our town needs. The as yet un-named Secondary Academy is currently being built in Broadwater, an area already congested with traffic to the north of Worthing, some 20 minutes walk from the railway station. A central Worthing location for the new secondary school would have much better suited the needs of more members of the community, bringing life and learning into a massive empty, neglected space; and it would be an environmentally friendly initiative, being a location much better served by public transport. The council could have looked into funding an educational centre of excellence right in the centre of town instead of building another entertainment and shopping complex with enormous car park. We already have two large supermarkets with car parks within walking distance of Teville Gate, four cinema screens and plenty more empty car parks in the town centre. Enough already! 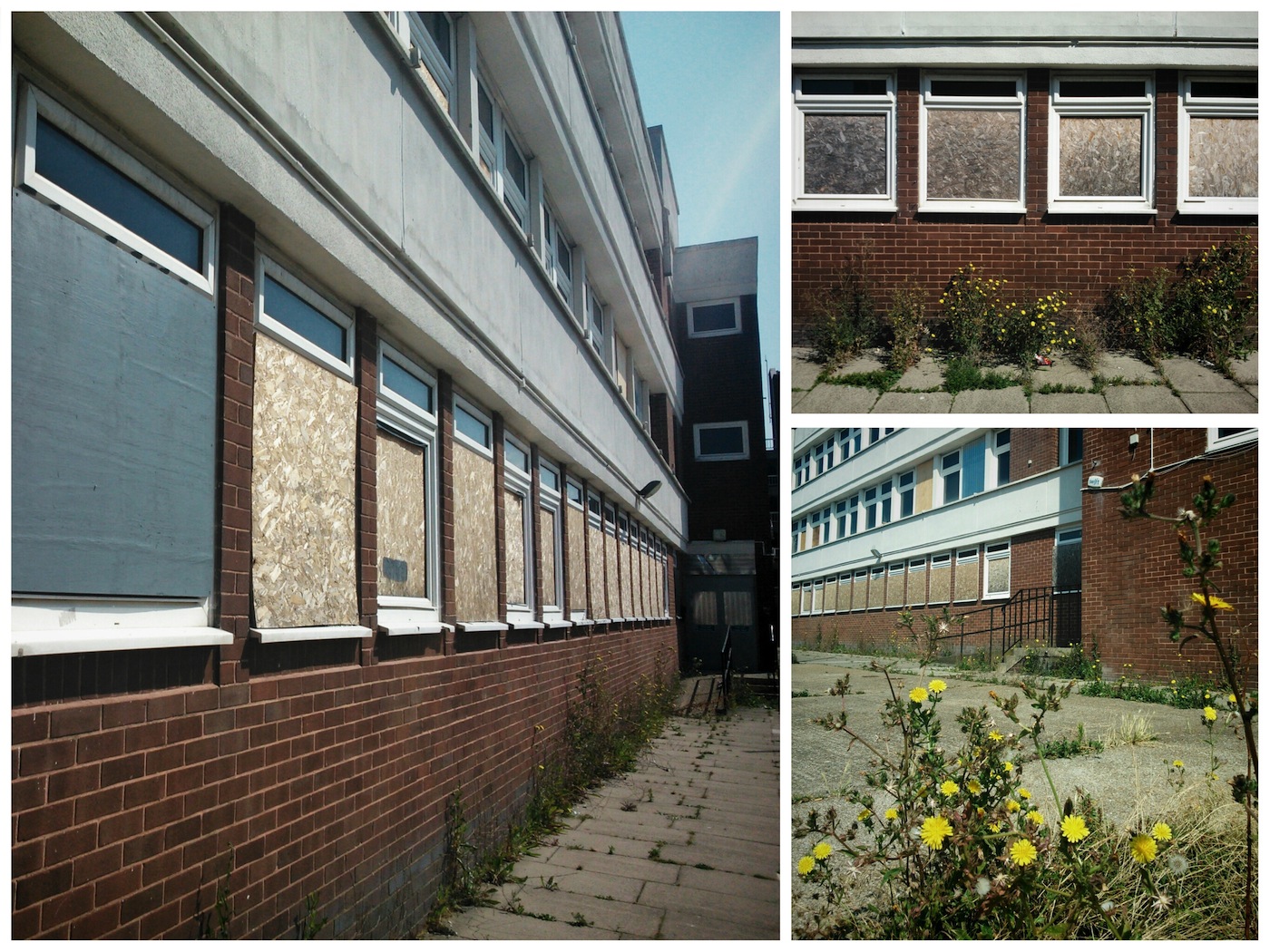 However, the current sponsors have just pulled out of the Secondary Academy with concerns about the Broadwater site being unsuitable so at this rate we'll be lucky if the new school gets built at all, let alone by 2015. Meantime, nature is making moves to reclaim Teville Gate herself. In another year or so it'll be ready to enter Worthing In Bloom. 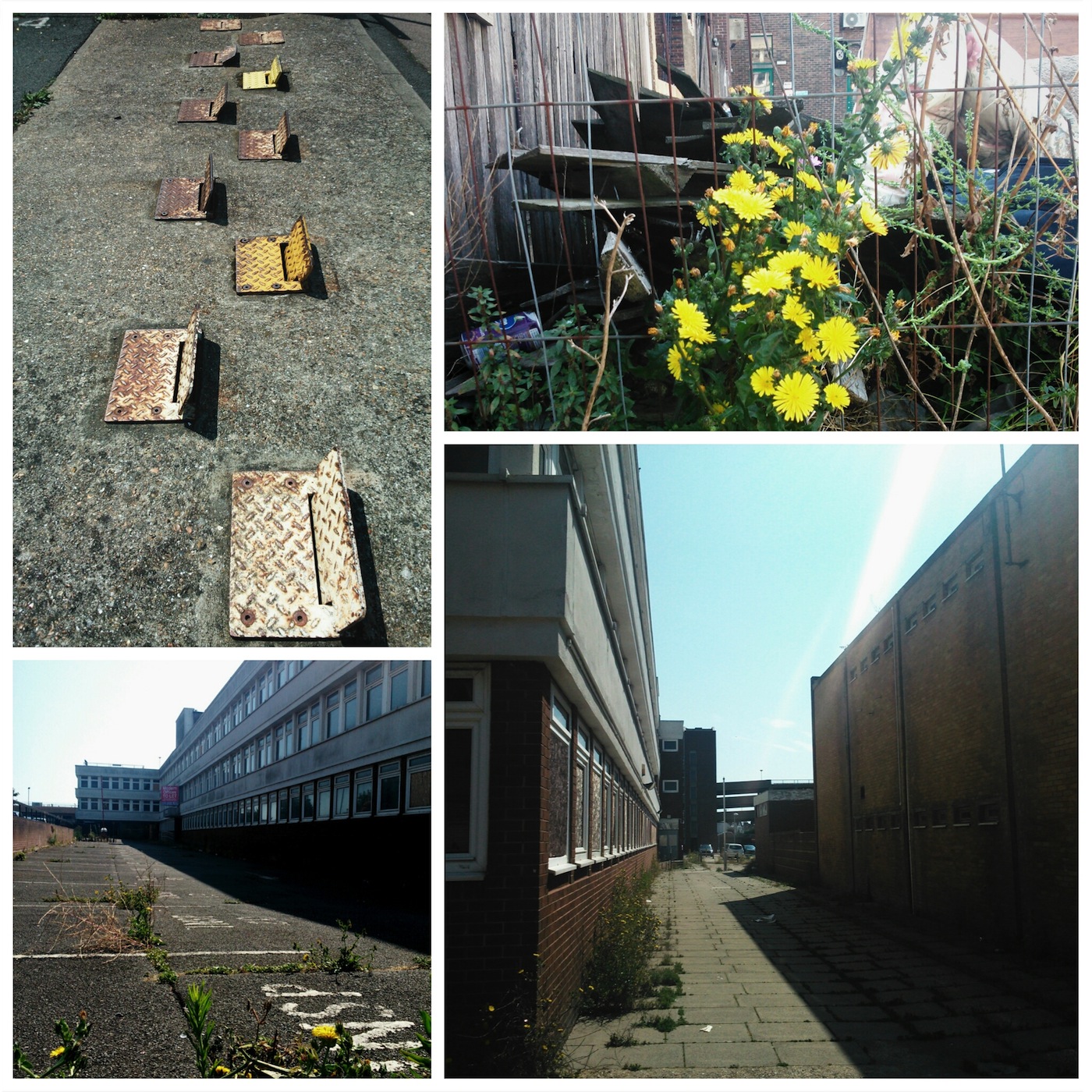 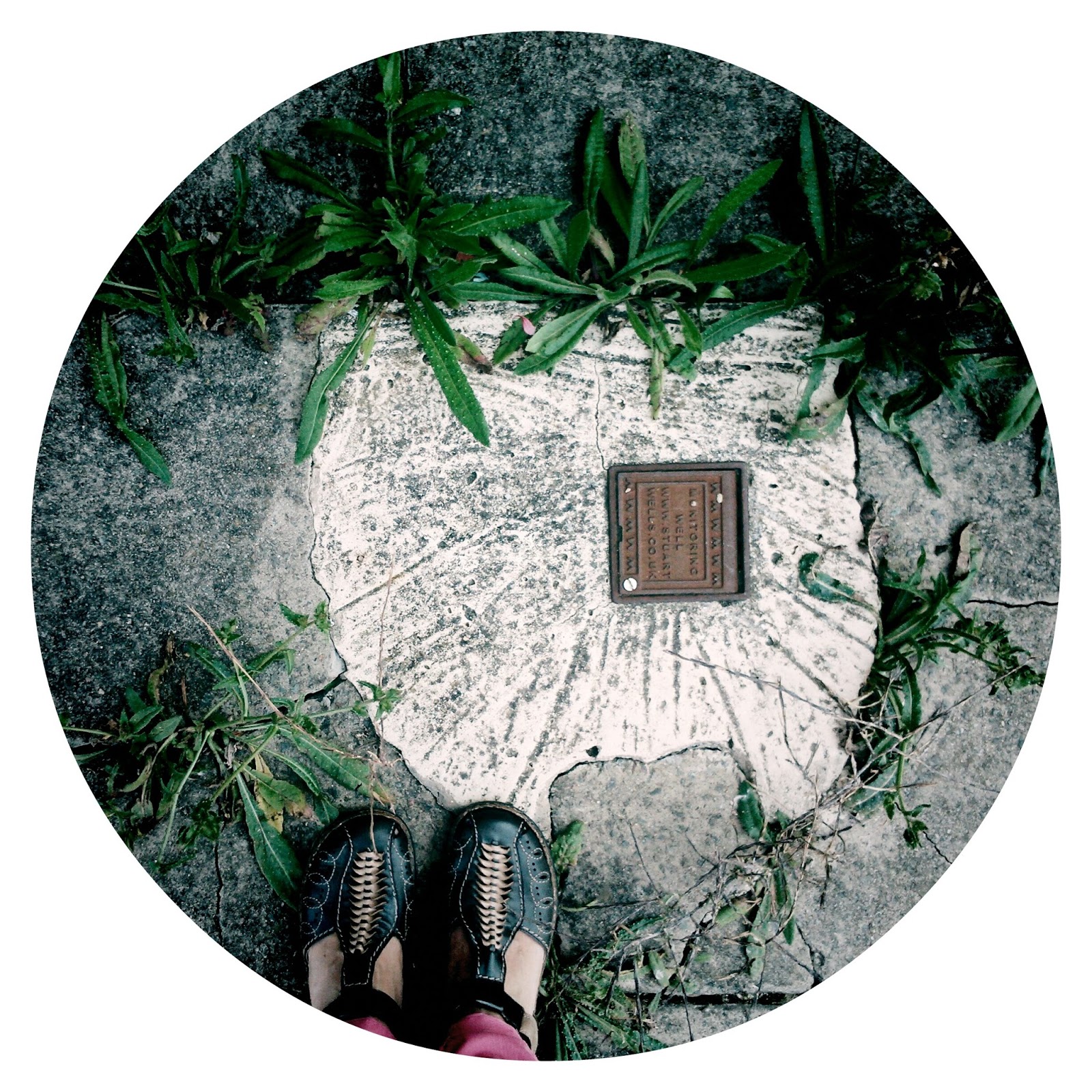 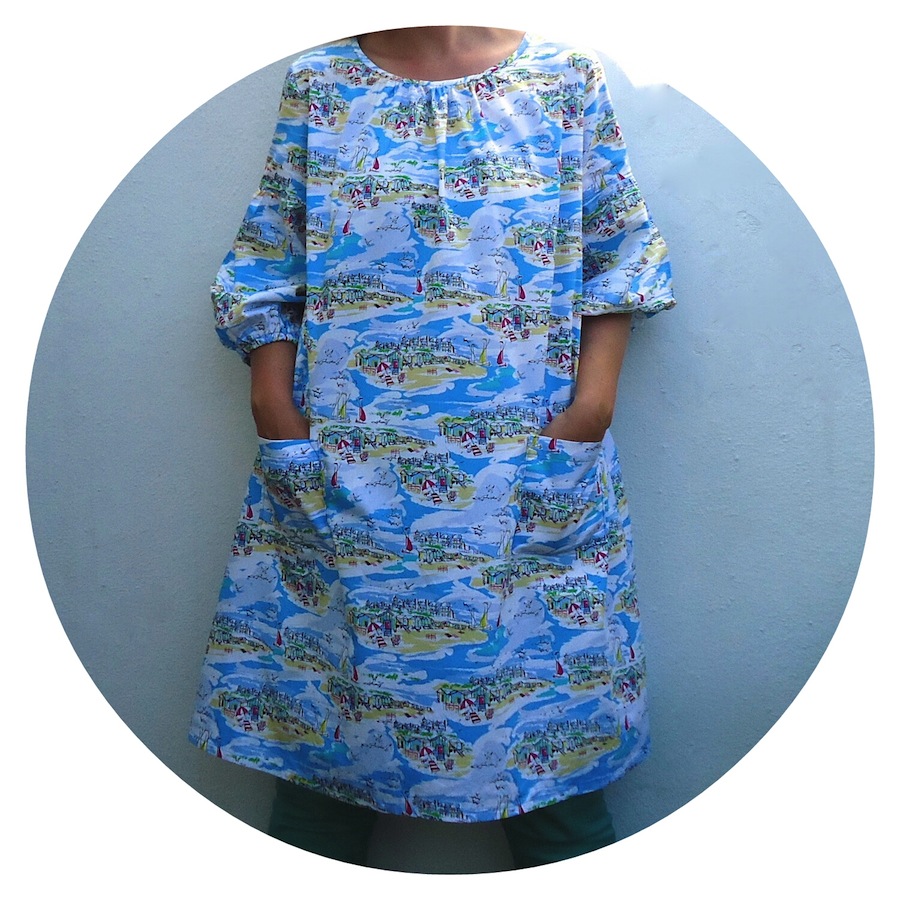 It's some 16 months since I discovered Stylish Dress Book the title that set me off on what has become a dressmaking odyssey. I've recommended the book to friends and acquaintances many times since and it's a title I always suggest starting with if you'd like to make timeless Japanese style clothes that are contemporary and comfortable. I've made 10 dresses from it so far. Showing it to a friend whose teenage daughter has just started sewing her own clothes I once again felt inspired to sew from this fabulous book. 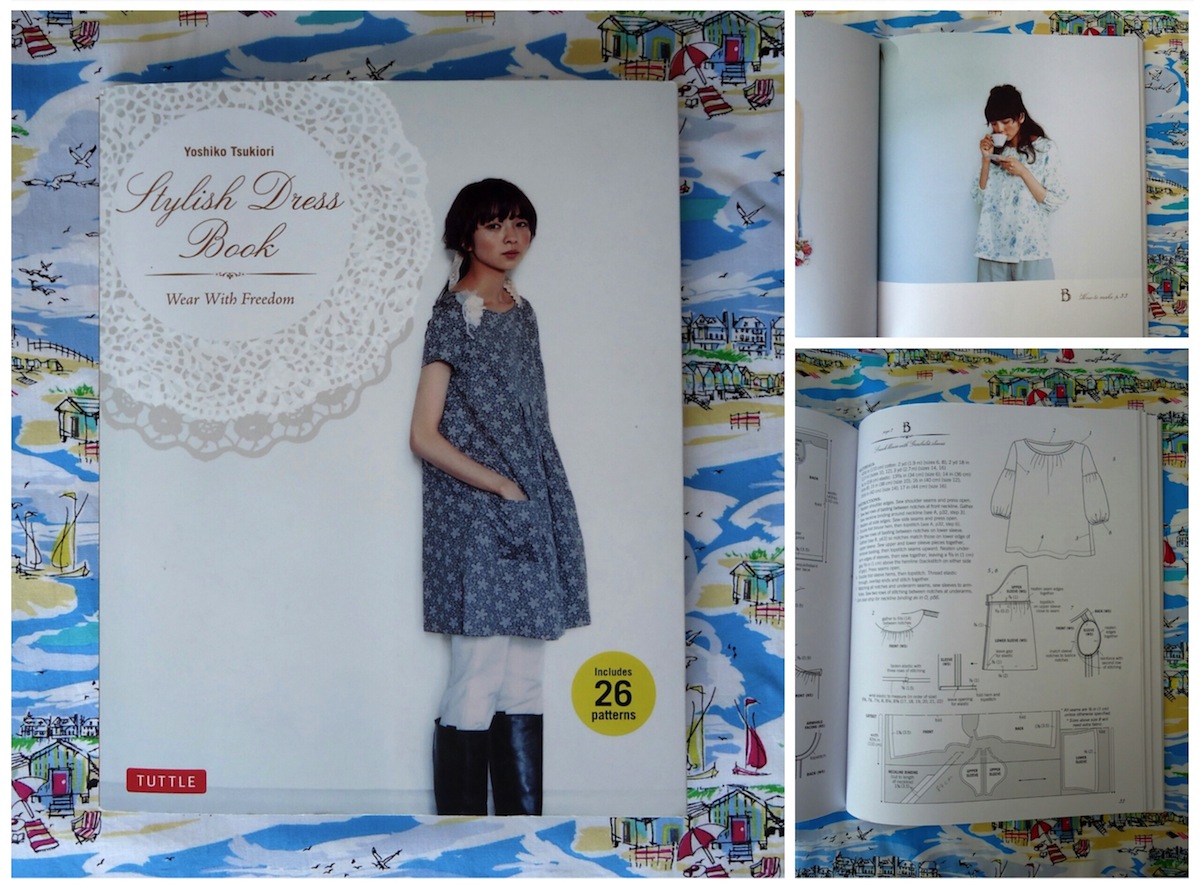 This seaside print cotton fabric has been in my stash for a year and I could neglect it no longer so decided to revisit pattern B (a design for a blouse with elasticated cuffs) and make myself another smock lengthened to a dress. This time I redrafted the Garibaldi sleeves, as in the first version I made I accidentally omitted an instruction in drafting the bottom section of the sleeves so my arms lacked the right amount of puff... 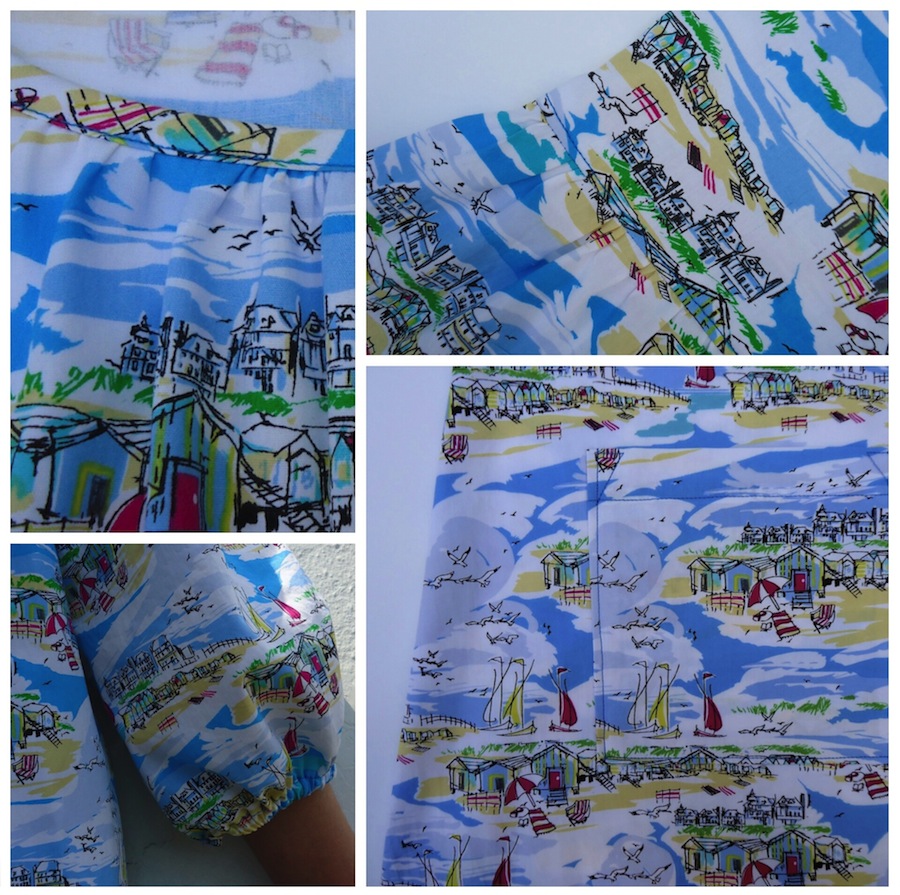 Adjustments made to the sleeve pattern, it was an even easier sew the second time round and the finished smock is perfect for this continued hot weather – the fabric just right for being beside the seaside. 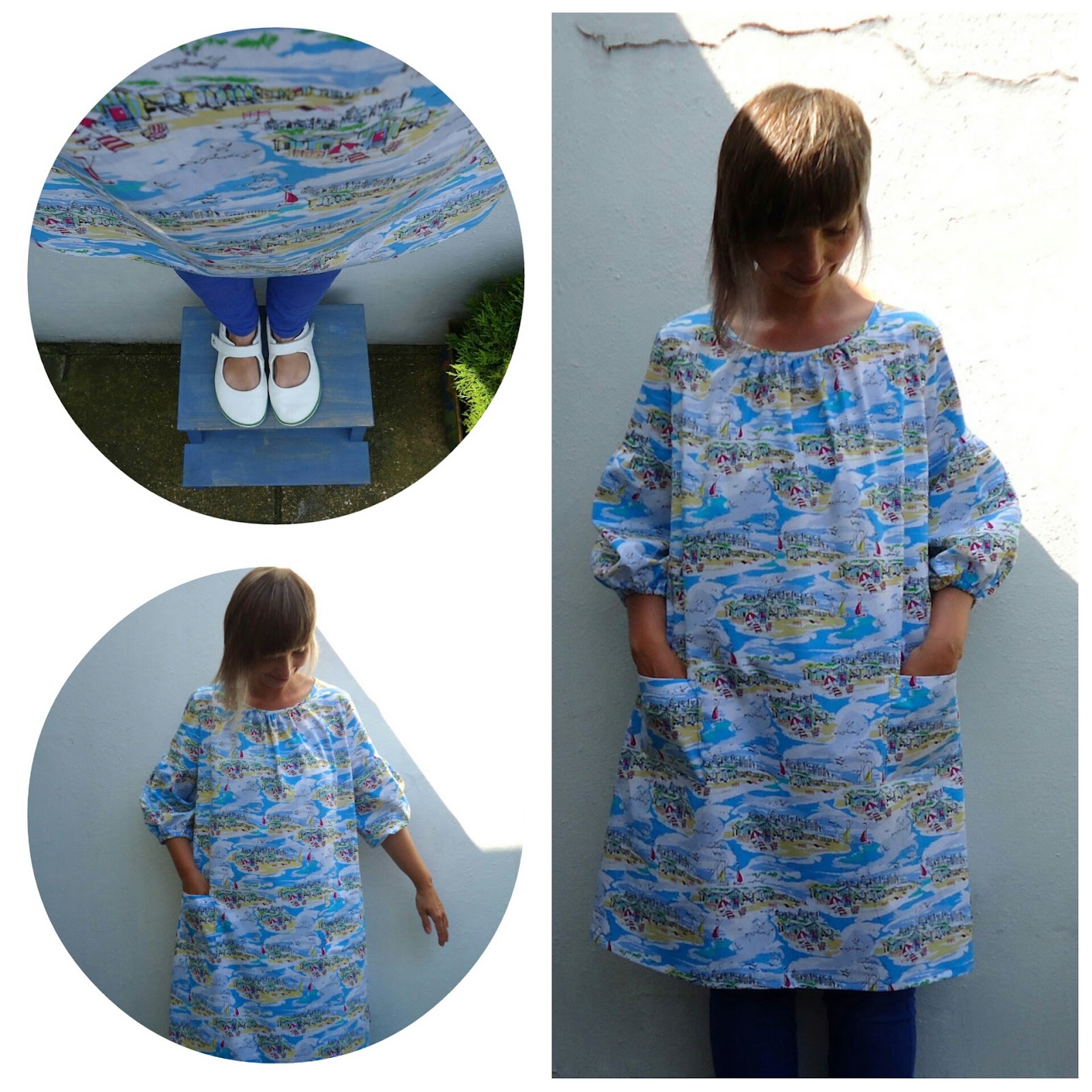 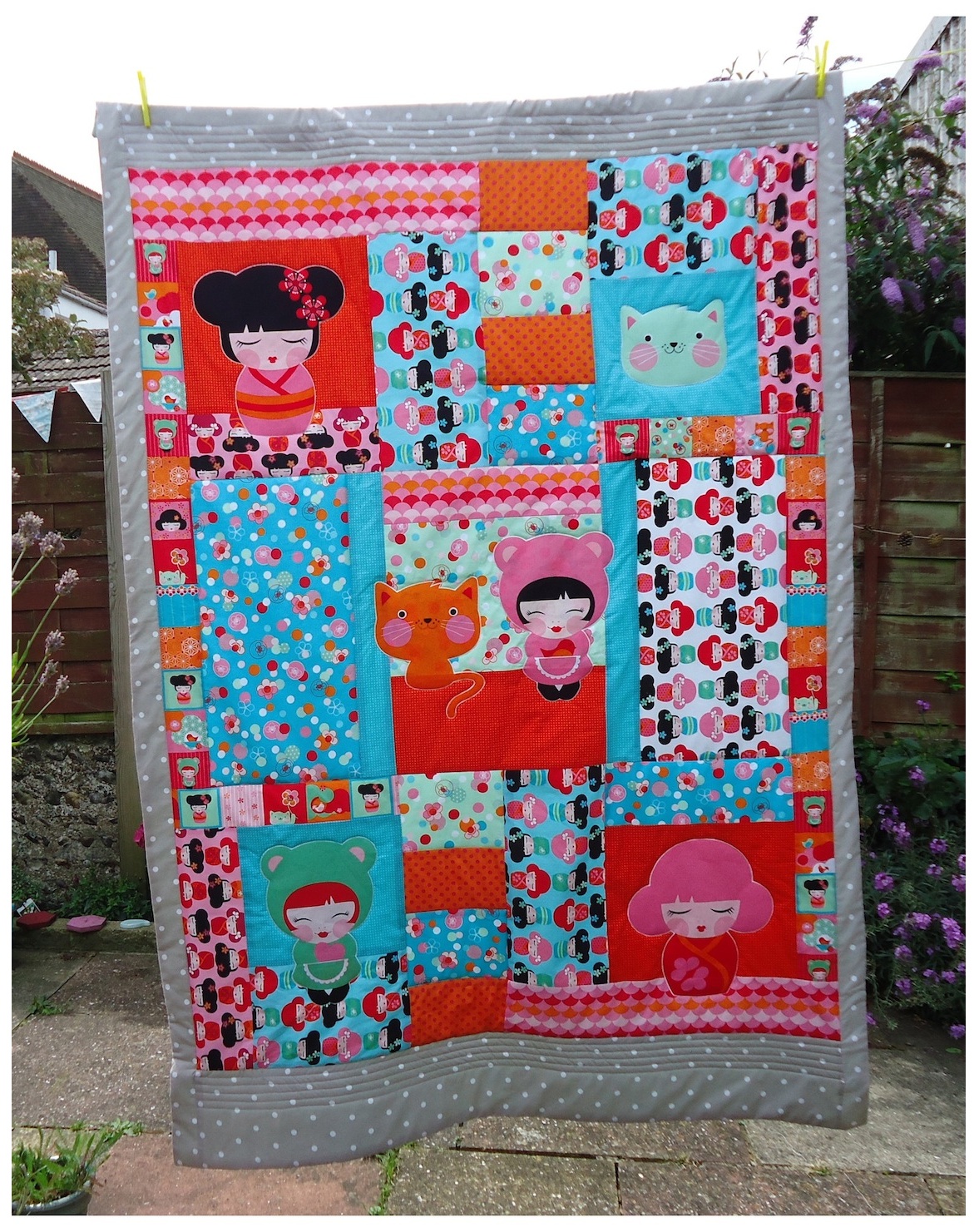 Hello Tokyo is Sydney designer Lisa Tilse (The Red Thread)'s first range of fabric, produced by Robert Kaufman. The range features Japanese Kokeshi dolls, kawaii cats, stylised flowers, spots and circles on colourful cotton fabric in the boldest brightest hues of pink, orange, mint and blue. I came across it last year and have been buying small amounts whenever I could find it at discounted prices, with a view to eventually making a quilt for my daughter as an end-of-school-year gift.


With the end of the academic year in sight, I took stock of how many pieces I'd amassed and downloaded Robert Kaufman's free Hello Tokyo quilt pattern. The quilt design comes in two suggested colourways, one predominantly pink, the other mostly blue. I used a mixture of both colours, adding in some orange polka dot cotton left over from other projects. My version is pretty faithful to the Kaufman template but I've swapped a few of the blocks and changed the positioning of some of the cute appliqué characters. 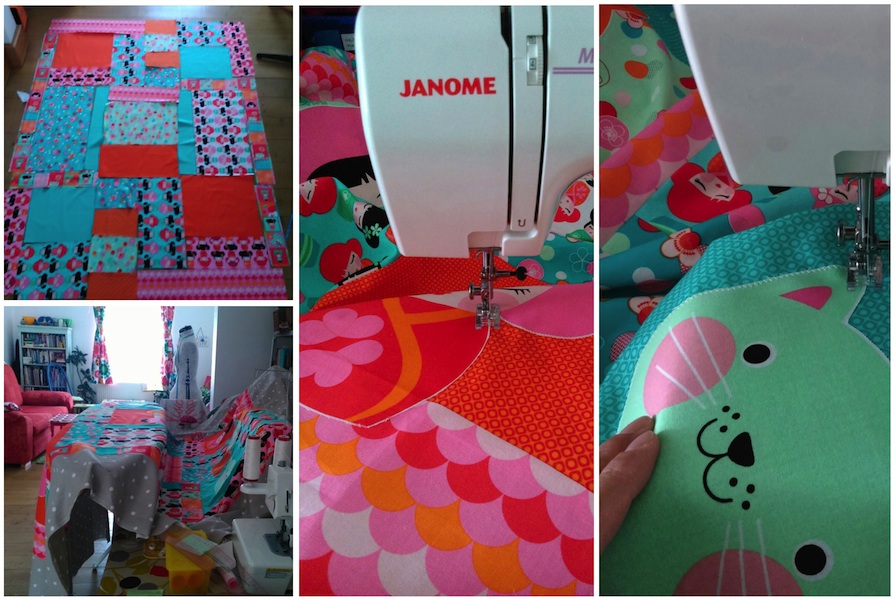 This is the first patchwork quilt I've made and I didn't fully appreciate how much space is needed to make a bedspread sized quilt! I cleared floorspace in the lounge to lay out and assemble the squares, then had to drape the work-in-progress over a chair, ironing board and across the dining table so that family life could resume as normal in between sewing sessions – just about manageable in our narrow Victorian terraced house. (The houses in my street were built in 1870-80s and typically housed Worthing's working people - including dressmakers and manual workers.)

Cutting out and laying out the pieces took hours but once arranged sewing the blocks together was a speedy and wholly absorbing process. I cut out the appliqué characters leaving a 2mm white border, used fuse-a-web to fix them to the quilt then machine zig-zagged around the edges to secure them in place. Next I added a greige polka dot border to the patchwork. I wanted a border that would make the Hello Tokyo fabrics really stand out and this colour also gives the quilt an elegant edge. Then I made a huge inside-out quilt sandwich of the patchwork, wadding and a mint green cotton lining fabric, sewed it together leaving a gap, turned it through, then hand stitched the turn through gap. Finally I fastidiously pinned all three layers together before beginning machine quilting. I sewed around the appliqué shapes, highlighted some of the square patches and channel quilted the head and foot of the quilt to finish. 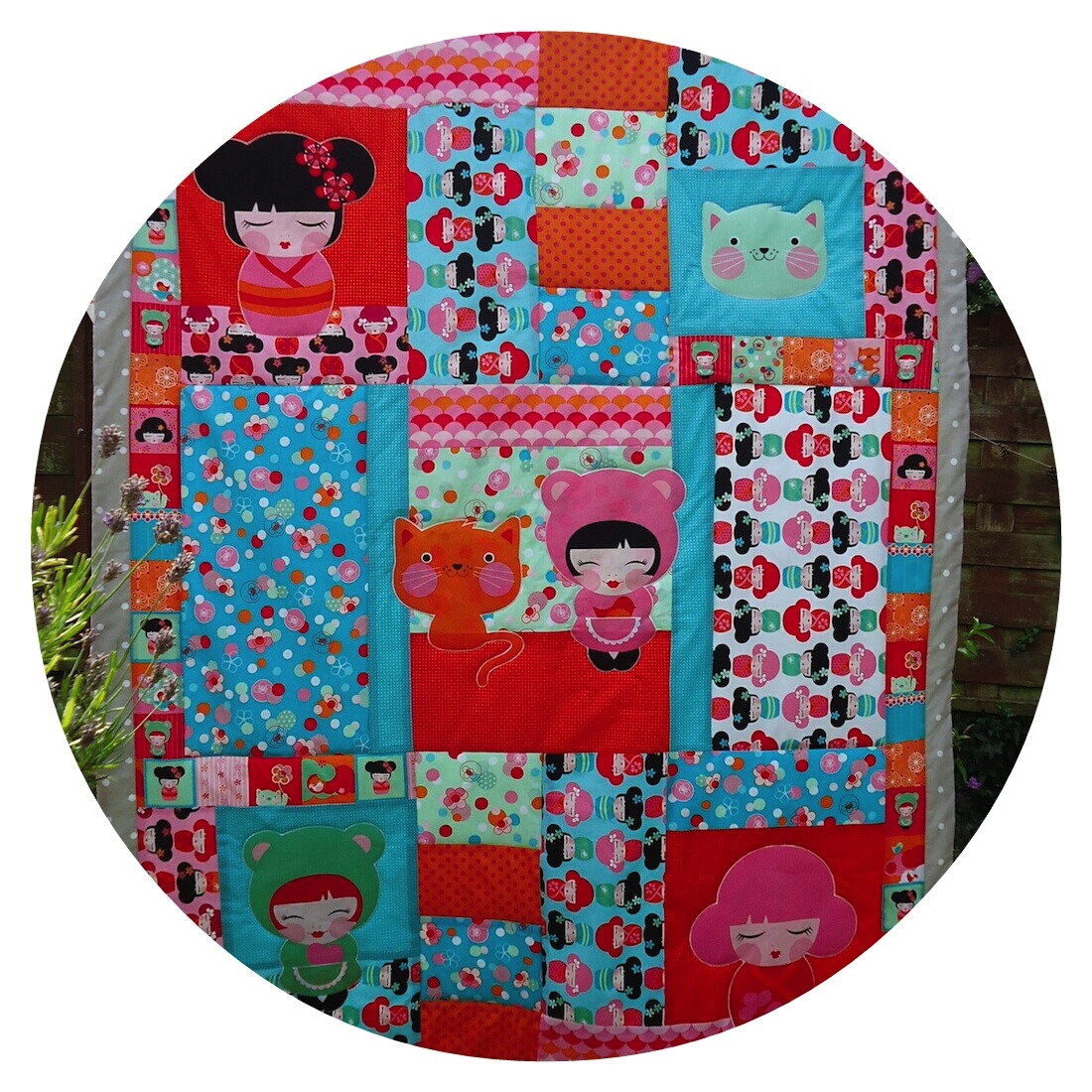 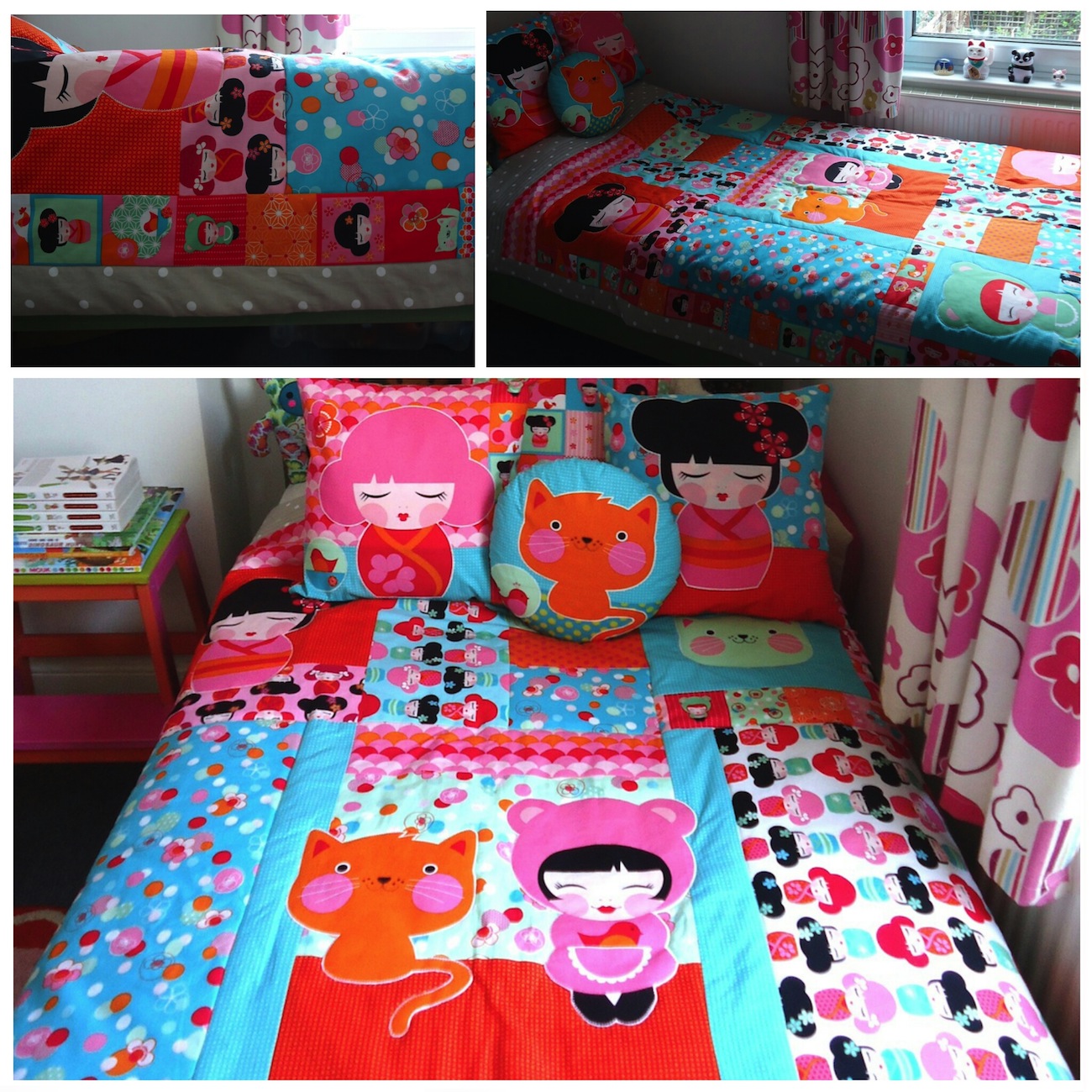 The patchwork cushions were very quick and easy to make after wrestling with such a huge object as the quilt - they have envelope backs so that they can be swiftly removed for washing. 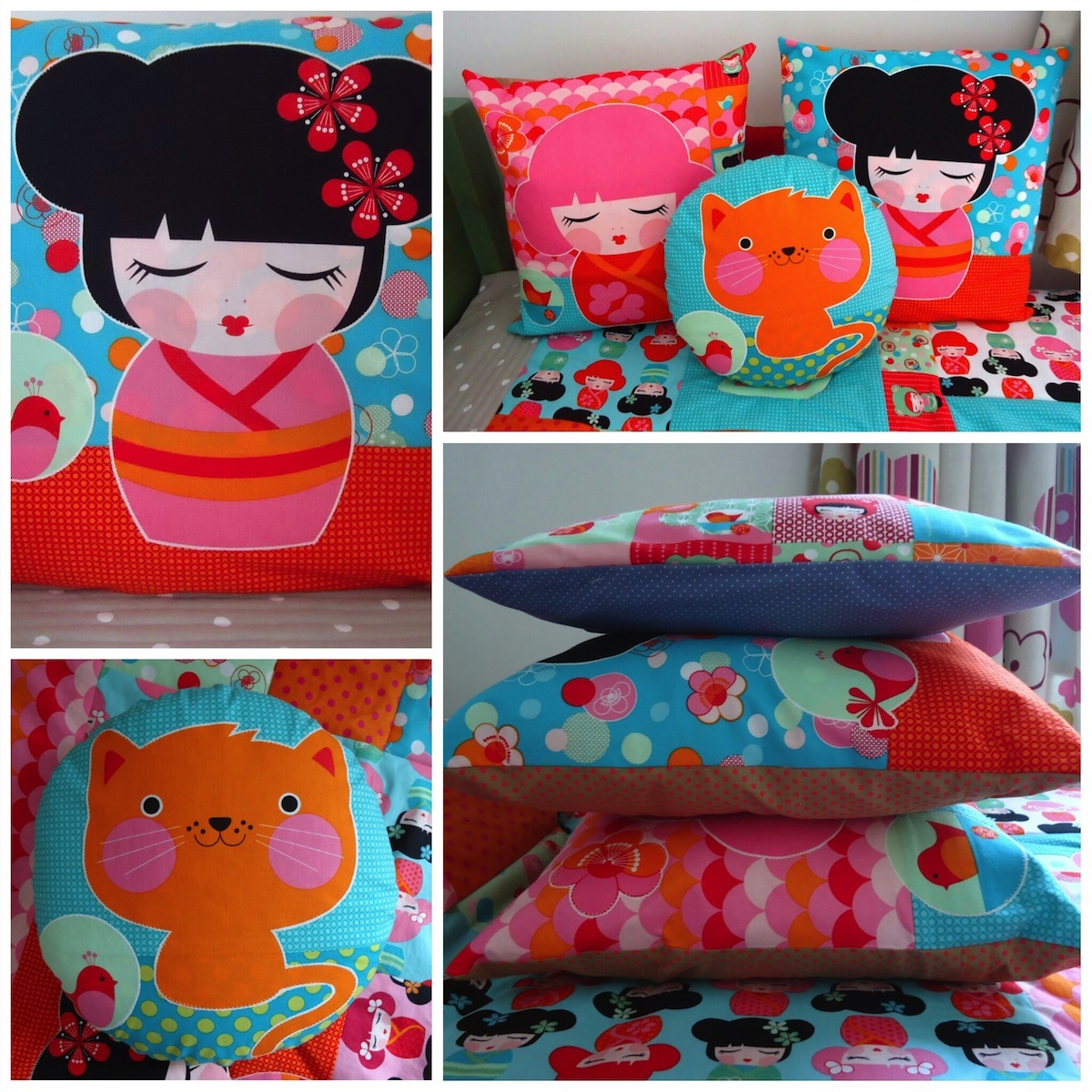 The finished quilt really brightens up her bedroom – we're both thrilled to bits with it – and I'm now motivated to do more patchwork quilting. Watch this space! 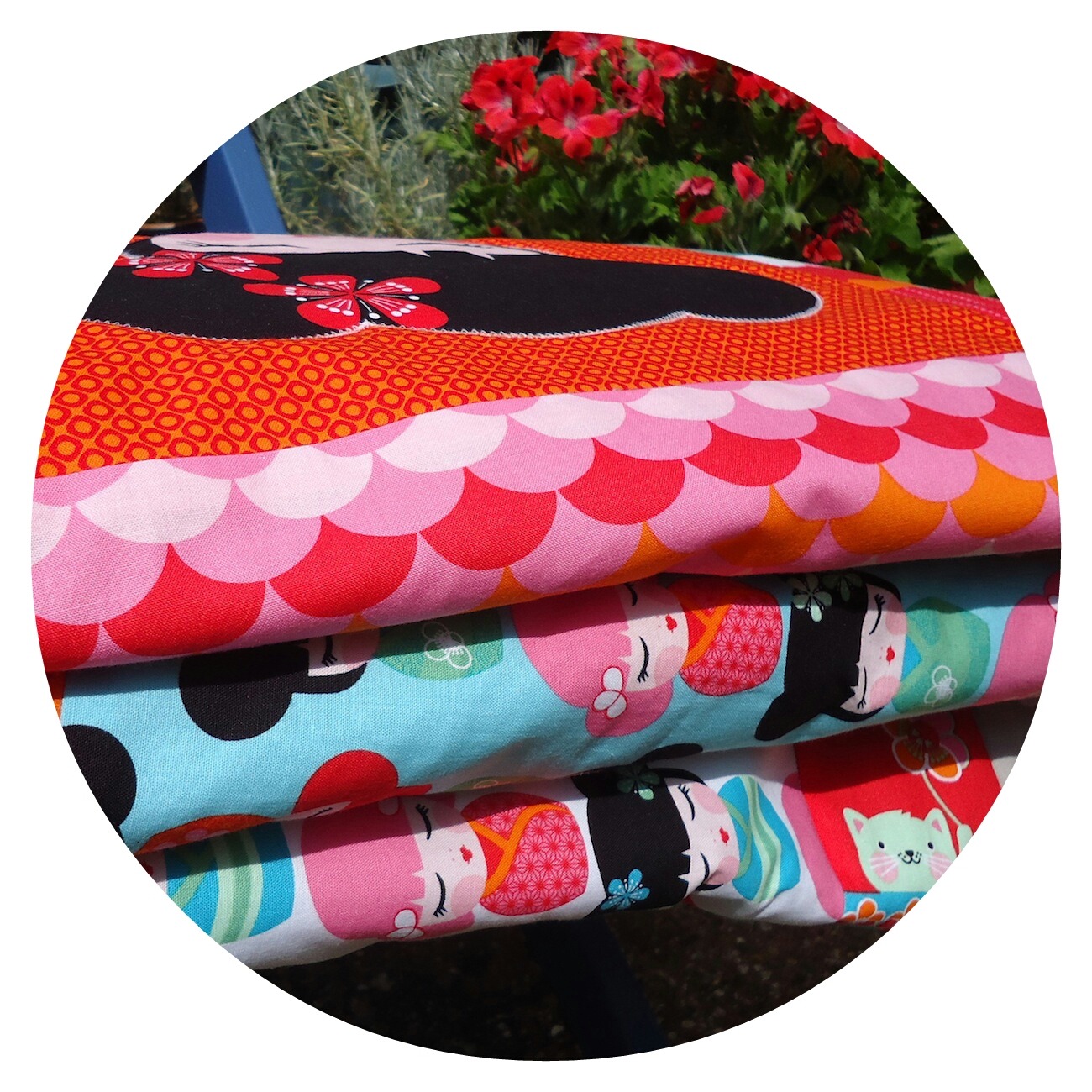 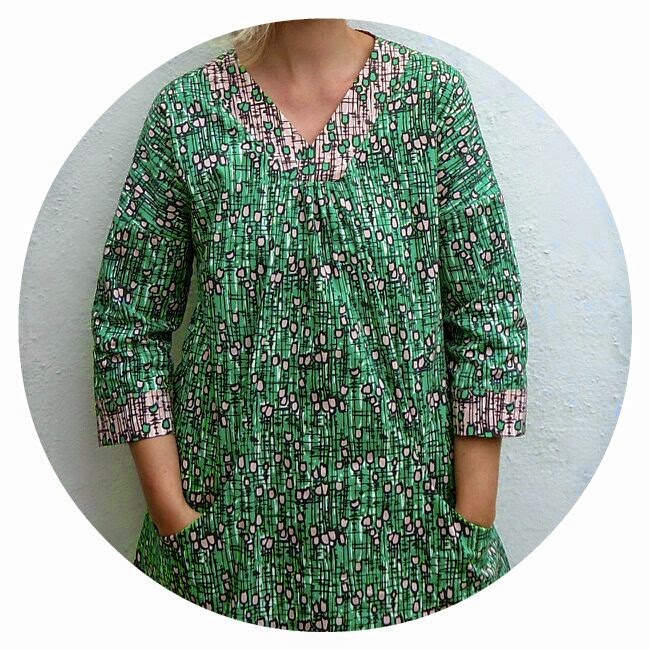 Did I need an excuse to make another Cappuccino dress? I'm blaming the hot early summer weather we've been enjoying and these gorgeous pink and green fabrics from Hemingway Design.  I spied them in Brighton's Ditto Fabrics and had a hard time choosing between the delicious range of colours in Hemingway Design's vintage-inspired collection of cotton poplins. The yellow Wonky Maze print was tempting and the duck-egg Texture and Twigs fabrics divine, but I snapped up some Tulip in both green and pink varieties. It has clusters of small tulip flowers on a background that looks like it's been hand drawn with felt-tip pens. 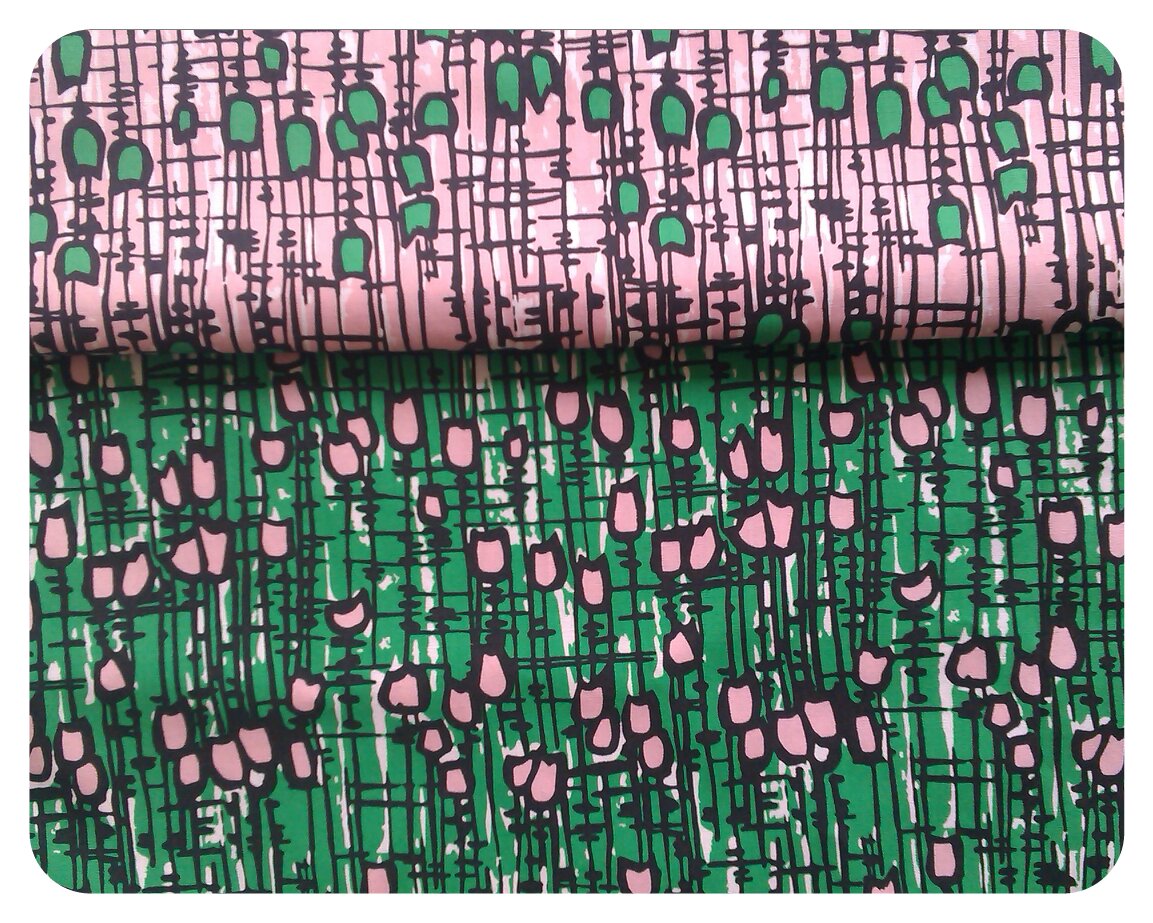 It's surprising that Gerardine and Wayne Hemingway haven't produced fabrics for dressmaking before – I still think wistfully about the brown and beige retro print carpet bag I bought from Red or Dead's Covent Garden shop a quarter of a century ago. Their textile range for Makower is superb quality and an absolute gift to dressmakers, buy a metre or two if you can! 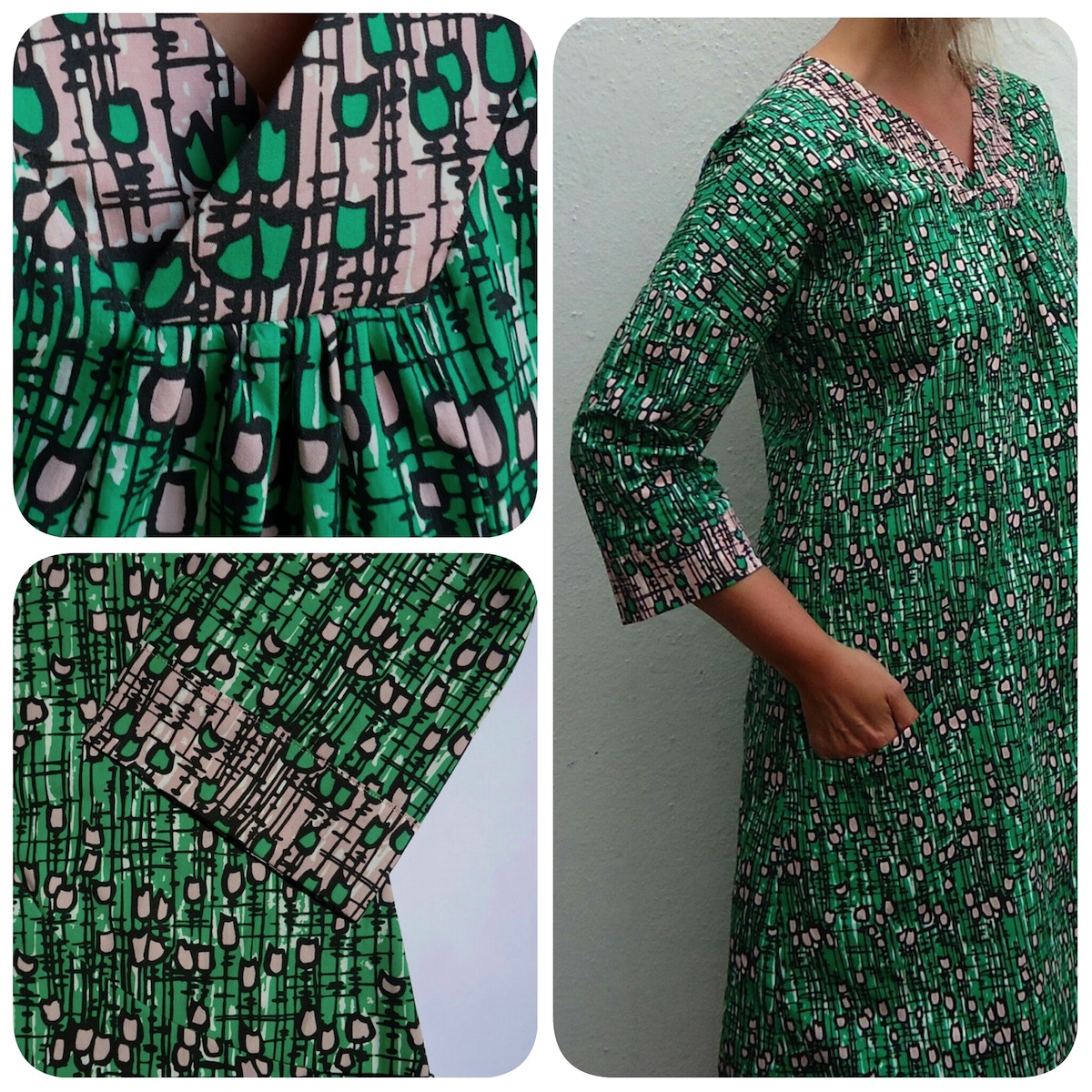 These photographs really don't do the colours justice, the green is bright and much more vivid in real life. However I've been wearing the Hemingway Cappuccino dress as much as I can to make sure as many people as possible benefit from seeing this fantastic fabric. 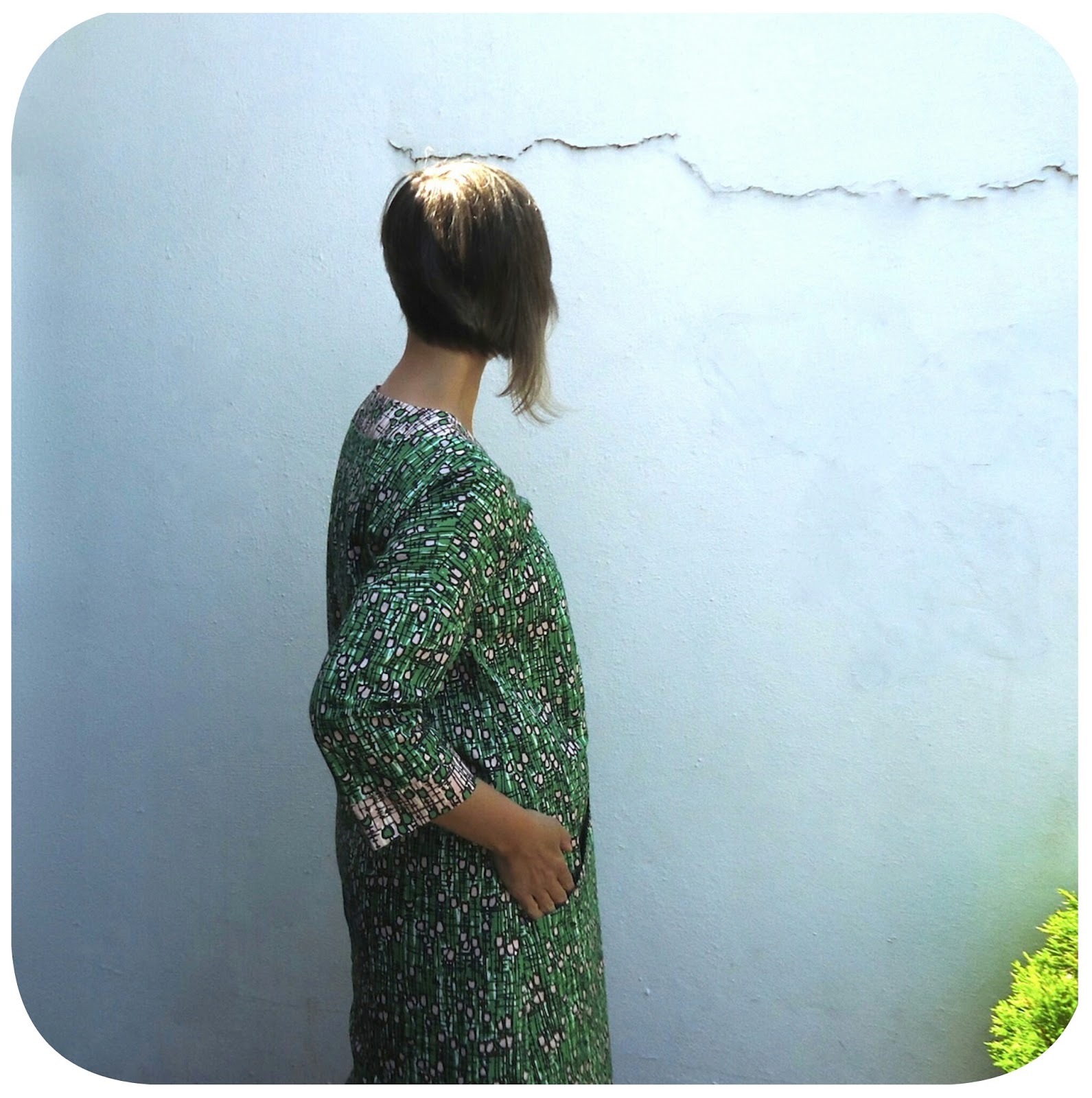